• Sharing of such photos also has the potential to cause despondency among the country's armed forces as well as negatively affecting the families of the victims and unity of the country. 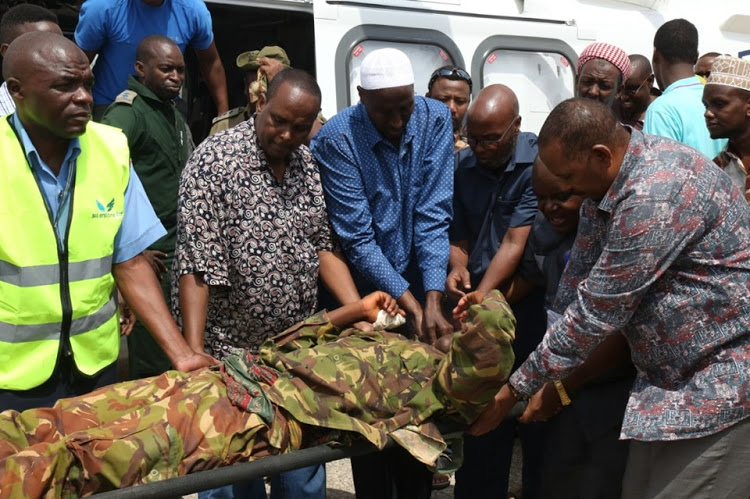 One of the AP police officers who was injured in the Konton IED attack in Wajir on June 15 is assisted by local leaders led by area Governor Mohamed Abdi to board an aircraft to Nairobi for specialized treatment.
Image: COURTESY

The National Police Service on Monday criticised Kenyans who have been posting gruesome photos from the Wajir attack.

In a statement, it said, "It is very disappointing to notice that some individuals have opted to callously disregard common decency of showing respect to the departed and their families."

The commission ordered Alai to pull down the photos.

The blogger had posted bodies of some of the Kenyan police officers whose vehicle ran over an Improvised Explosive Device over the weekend.

Commission secretary Hassan Mohamed said the photos can be construed as glorifying acts of terrorism.

He said sharing of such photos also has the potential to cause despondency among the country's armed forces as well as negatively affecting the families of the victims and unity of the country.

"Whereas Alai has the freedom of expression, such publications can be interpreted as propaganda for war which is not protected under the constitution," read a statement sent out on Monday.

Condemning Alai, the commission said, "We therefore urge Alai to immediately pull down the said photos from his social media platforms and request other social media users not to share them."

Inspector General Hillary Mutyambai said the eight were among 11 officers on patrol in a a Land Cruiser between Khorof-Harar and Konton along the Kenya-Somali border before they encountered the attack.

Mutyambai said he has dispatched additional resources, including aerial surveillance capability to continue the operation.

Cops were on patrol between Khorof-Harar and Konton along Kenya-Somali border.
News
3 years ago
Post a comment
WATCH: The latest videos from the Star
by PATRICK VIDIJA Investigative Journalist
News
17 June 2019 - 18:06
Read The E-Paper