Each of the American envoys has served at different terms in Kenya’s history and they have had varied impacts.

• Mcarter, the 17th US ambassador to Kenya, has arrived at a time the country is battling corruption and terrorism.

• Twitter is Mcarter’s principle tool of communicating with Kenyans, and he recently sent tweets condemning graft in Kenya. 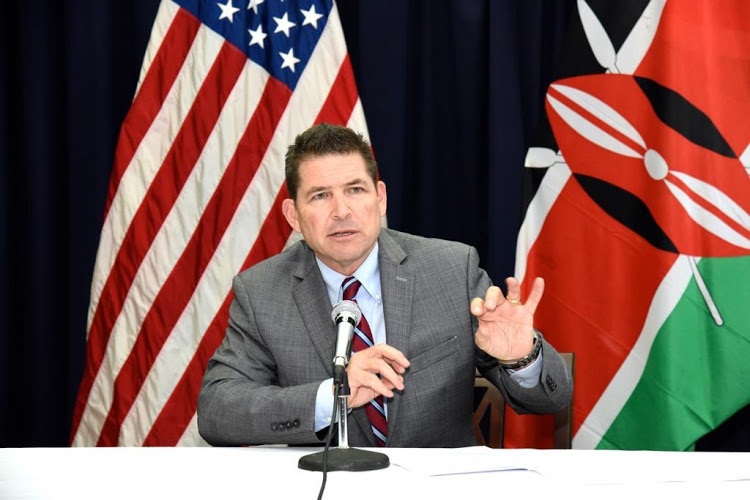 On February 5, US Ambassador Kyle Mcarter told a group of Kenyans at a church service and dinner in St Louis, Missouri, that President Donald Trump’s priorities in Kenya would be to support the fight against corruption and terrorism.

In retrospect, US-Kenya relations have had a checkered history. During the Cold War, Kenya aligned itself fully with the US and the West in the campaign against communism. Eight US ambassadors served in Kenya during this period.

The first US envoy William Attwood (1964-66), had a short tour of duty, as he was expelled after criticising President Jomo Kenyatta’s government in his book, The Blacks and the Reds, which remains banned in Kenya.

Each of these ambassadors has served at different terms in Kenya’s history and they have had varied impacts. Gration, for example, has served the shortest period, while Bushnell is remembered for her valiant handling of the 1998 Nairobi US Embassy bombing.

Carson is credited for the diplomatic push to persuade President Daniel Moi to step down after serving his two terms post-multiparty politics; Ranneberger is remembered for pushing the generational change youth agenda through President Barack Obama’s ‘Yes, Youth can’ programme that nearly caused his recall through an aborted impeachment motion in the National Assembly.

But it is Hempstone’s ‘undiplomatic’ approach over multiparty politics that drew the ire of President Moi and his Kanu regime. Hearrived in Kenya on December 7, 1989 at a time of the fall of the Berlin Wall, marking the end of communism and the dismantling of single-party regimes elsewhere.

Whereas the Third Wave of Democratisation was sweeping across sub-Saharan Africa, Kanu had resisted political change.

Hempstone dared Moi to open the political space and to release political detainees.   In a speech at a function at the Nairobi Rotary Club in May 1990, the envoy declared that the US would provide aid to countries that nourished democratic institutions, defended human rights and practiced multi-party politics.

For daring to take a stand against Moi, he was Kanu’s number one enemy. At one time, the Foreign Affairs minister Ndolo Ayah branded Hempstone a slave master!

But Hempstone wasn’t the man to budge. Initially alone in the multiparty crusade, he managed to persuade other Western ambassadors in Nairobi, notably those from the Nordic countries and Germany, to join him.

Prof Michael Chege has noted that Hempstone became a Kenyan folk hero, celebrated in song and poetry. More than any other US ambassador in Africa, Hempstone spoke freely against dictatorship and in favour of civil liberties.

Mcarter, the 17th US ambassador to Kenya, has arrived at a time the country is battling corruption and terrorism. Whereas there is not a doubt that US-Kenya collaboration in combatting terrorism is a huge success, corruption remains elusive: It still has to adequately receive policy attention in Washington.

Mcarter is increasingly becoming visible among ordinary Kenyans, especially on the war against corruption. He is beginning to bite. Like his boss in Washington, Twitter is his principle tool of communicating with Kenyans.

His tweet some few weeks ago was satirical, cleverly couched to mock Kenyan leaders attending the Annual National Prayer Breakfast in Nairobi. He urged the leaders to walk the talk on the war on corruption.

The ambassador recently followed up with another tweet in Kiswahili, with a touch of Sheng slang, urging Kenyans to reject corrupt in society.

He wondered how Kenyans would welcome corrupt people in their midst as heroes and heroines, while petty thieves earned huge punishments, including jail terms.

Mcarter’s mounting voice against corruption seems to enjoy the support of other major Western embassies in Nairobi, notably the British, the Nordic states, Germany and Canada.

These countries have in the past voiced their concerns about corruption in Kenya.

It should be recalled that the combined onslaught of these countries alongside the World Bank and the International Monetary Fund in the 1990s, enabled the local pro-democracy movement to compel the Kanu regime to re-introduce plural politics in 1991.

The challenge now is whether this time round, the US and the other Western embassies in Nairobi are ready and willing to apply their combined onslaughts to tame the rising tide of corruption. One option these countries have, and which has been used in the past, is to deny travel visas to graft suspects.

However, this option has had little impact because the names of such suspects have not been made public, in part because of visa regulations.

But exceptions could be made, especially to high-ranking officials, if only to shame them and to serve as examples to others.

The other option that has also been used in the past with minimal success is the seizure of property and finances illegally acquired and stashed in some of these countries.

It is now time for this move to be expedited and those found culpable to be similarly exposed to the public.

The third option is for the US and the West to use the carrot and stick.

If diplomatic collaboration fails and push should come to shove, they could exert non-diplomatic measures, including denial of development and aid funds to institutions that frustrate anti-corruption measures.

The writer is a former employee of the US Embassy’s Public Affairs Section in Nairobi and comments on political and coastal issues.

Incoming United States ambassador to Kenya Kyle McCarter has revealed President Donald Trump's agenda for Kenya, key among it being to help ...
News
3 years ago

Ruto said Kenya and the US are committed to bolster trade ties.
News
3 years ago

Kenya can go from being a beneficiary to a benefactor.
Opinion
3 years ago
Post a comment
WATCH: The latest videos from the Star
by KAZUNGU KATANA
News
16 June 2019 - 07:01
Read The E-Paper