US says it will reduce funding for HIV from Sh50.5 billion this financial year to Sh35 billion next year

• US official says there are indications the country is getting close to the UNAIDS 90-90-90 goals. 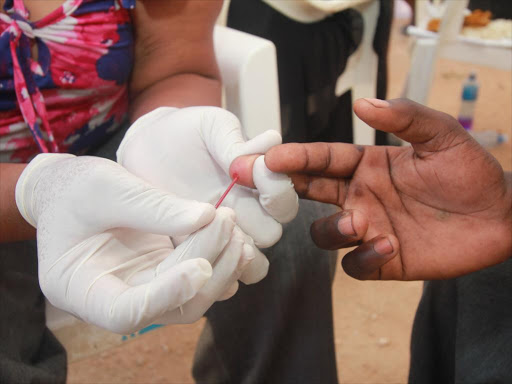 MILESTONE: A volunteer gets tested for HIV
Image: FILE

The US government says HIV incidence in Kenya is declining, hence the country will be getting less money to combat the epidemic.

This rationale informs this week's heavy cuts to Kenya by the US President's Emergency Plan for Aids Relief (Pepfar).

Pepfar said it will reduce its funding to Kenya from Sh50.5 billion this financial year to Sh35 billion next year.

At least 1.5 million people live with the virus, but only one million are on treatment, according to the National Aids Control Council.

"Kenya has made enormous strides in the fight against HIV and has completed or is nearing completion of many Pepfar programme goals," Pepfar chief Deborah Birx said in a memo to US Ambassador Kyle McCarter.

"There are indications the country is getting close to the UNAIDS 90-90-90 goals. We believe that Kenya may be close to achieving viral load suppression and declines in incidence, given the level of investment we have made."

US ambassadors are responsible for implementing Pepfar programmes in their respective countries.

Birx said funding to Kenya may be adjusted depending on results of last year's Kenya Population-based HIV Impact Assessment (Kenphia) study, which were never released.

"We remain concerned about the lack of transparency in the Kenphia survey data as there are other surveys that began after Kenya’s, were larger in scope, and we already have full data available for planning and budgeting," the letter sent in January reads.

Kenya’s HIV programme is heavily reliant on external funding and the US government has historically accounted for nearly three-quarters of HIV spending.

With global funding for HIV flagging, Pepfar said it is now focusing on achieving control — which means limiting the number of new infections each year to less than the number of deaths among people living with HIV — to ensure the sustainability of the response.

The dramatic cuts to Kenya during the current funding round took civil society organisations by surprise.

"Everyone in Kenya is alarmed with the cut," said Nelson Otuoma, executive director of Nephak, a network providing support to Kenyans living with HIV.

“Especially for key populations, such as sex workers and men who have sex with men, if Pepfar left them, the government will not take them up."

Otuoma was speaking to Devex, a US-based social enterprise and media platform for the global development community.

Thousands of youths live with HIV in Mombasa due to drugs

At least 3,000 children, some as young as 10 years old, are living with HIV in Mombasa. Most of the infections are linked to drug abuse using ...
Counties
4 years ago

The war against HIV in Homa Bay got a major blow after a key Non-Government Organisationannounced plans to downsize its staff citing financial ...
News
4 years ago
Post a comment
WATCH: The latest videos from the Star
by JOHN MUCHANGI Science Editor
News
15 June 2019 - 06:00
Read The E-Paper