• Education and security officials carried out investigations for more than five hours as parents and journalists waited in the school compound.

• Gichana said as education officials alongside other stakeholders reached the decision due to tension in the school following the incident. 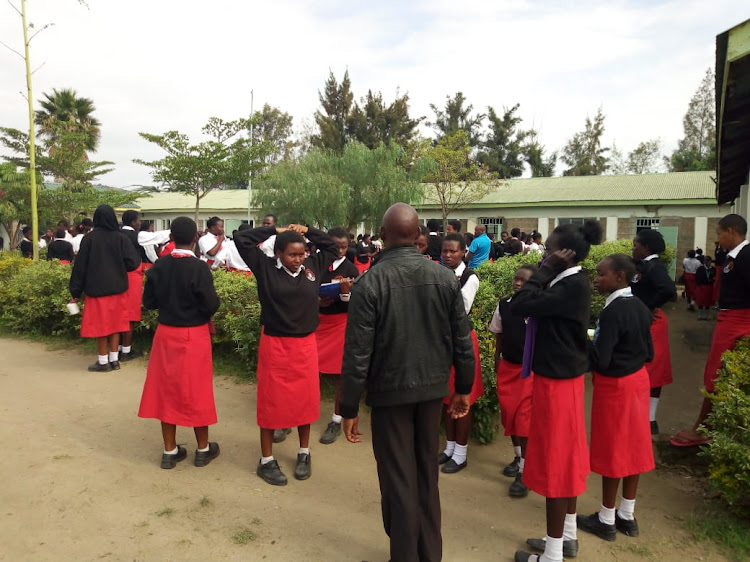 Officials from the Ministry’s headquarters in Nairobi announced the closure of St. Stevens Girls Secondary School after, together with security and education officials from Machakos, conducted an inspection of the school.

The officials carried out investigations into the incident for more than five hours as parents and journalists waited in the school compound.

Senior Assistant Director Quality Assurance Alice Gichana ordered that the students be sent home for early mid-term holidays on Tuesday until June 11 when they will return to school normally.

Gichana said as education officials alongside other stakeholders reached the decision due to tension in the school following the incident.

She noted that both the students and their parents were traumatized hence the need for the children to be released to their parents for the crisis to be managed.

She addressed the parents together with their children shortly after they concluded their meeting at the school director Kioko Nzeve’s office.

Gichana ordered that the parents who had gone to school to inquire what exactly happened to be given their children and those who were not in the institution be called by the administration to go pick their girls on Wednesday.

“We have confirmed the attacks and torching of the car belonging to Standard Media Group. We condemn the incident and acts of hooliganism in our schools,” she added.

The education official said they will continue with their investigations.

We have been here since morning to investigate what happened. We have consulted ourselves and the Education leadership in the county and agreed that the students go for early mid-term holidays.

“If investigations reveal that anybody in the school fraternity was involved in the incident, the law will take its course.”

Gichana, however, said there was no course for alarm since the situation had been calmed.

She said police officers had been deployed to secure the school and the girls until Wednesday when the students shall be picked by their parents.

Nzeve said some journalists had been severally calling him on phone with threats that they were following on stories that they intended to publish and air.

“It is disturbing to have media guys coming to this school every now and again. They have been extorting me, this was a classic case of extortion,” Nzeve said.

He did not, however, explain whether the attacked journalists demanded money from him.

Nzeve said the journalists were attacked before his arrival to the institution.

John Kyalo was arraigned in Machakos Law courts on Tuesday.

He was charged with assault causing bodily harm, contrary to section 251 of the penal code alongside three other counts.

Kyalo who doubles as the school’s manager pleaded not guilty to all the offences.

The court heard that on June 3, 2019, jointly with others not before the court, he assaulted Bonface Magana by throwing a stone that hit him on the forehead thereby occasioning him actual bodily harm.

There was also malicious damage of a camera and a tripod stand and arson contrary to section 332 where willfully and unlawfully a motor vehicle Isuzu double cabin property of KTN was set fire.

He was also charged with incitement to violence contrary to section 96 without lawful excuse as the school manager of St. Stevens Girls Secondary School.

The principal is said to have said, “these media people are tarnishing the name of our school! Stone them!”

The victims were all employees of KTN.

Kyalo will appear in the same court for mentioning on June 18, 2019.