• The President arrived at the event shortly after 11am.

• Thousands of Kenyans trooped to the stadium. 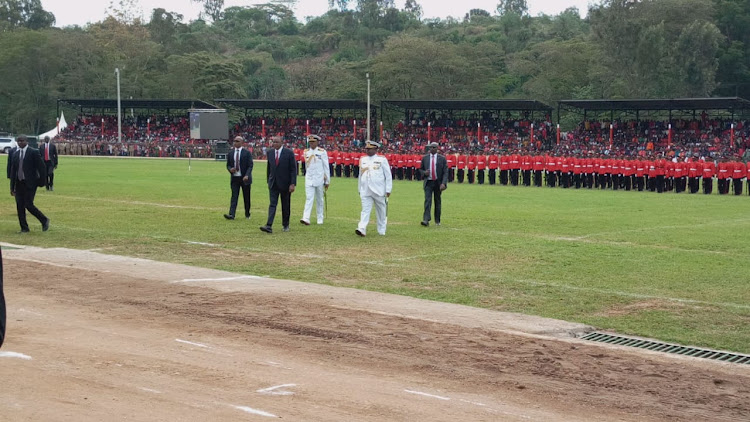 The President arrived at the event shortly after 11am.

Uhuru had finished greeting the officials and was headed to his seat when Raila tapped him, signalling he shouldn't forget to greet Siaya Senator James Orengo, who was seated on the second row.

Meanwhile, security was tight as police officers patrolled the area.

Thousands of Kenyans trooped to the stadium for the function as early as 2am.

Government officials arrived at the stadium from 8am.

The stadium was decorated with flowers in Kenya's flag colours: white, red and green.

The seats occupied by the guests and government officials were red and gold.

Kenya holds the celebrations on June 1 every year to celebrate attaining self-rule in 1963.

Past celebrations were held in the capital Nairobi, but they were moved to other counties from 2016.

In Nairobi, Governor Mike Sonko will lead the county in the celebrations at Pumwani maternity hospital.

Kenyans turned up at stadium as early as 2am.
News
3 years ago
Post a comment
WATCH: The latest videos from the Star
by MAUREEN KINYANJUI News Reporter
News
01 June 2019 - 11:38
Read The E-Paper