ART OF THE DEAL

The job signed on April 2 will see the former US envoy earn $3.7 million 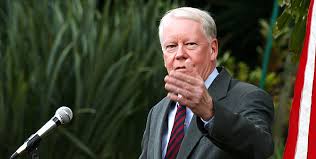 Former US ambassador to Kenya Michael Ranneberger has landed a Sh370 million deal to spruce up the image of the South Sudanese government and its president in the eyes of the American government.

The Star has obtained a copy of the contract in which Rannebeger is tasked to lobby for the South Sudanese government in Washington DC with a view to have Washington “reverse the current sanctions and further block potential sanctions.”

In December last year, the United States’ Treasury department slapped a raft of sanctions against various leading figures in the world’s youngest nation, citing their role in fueling the unending protracted war in the country that has claimed the lives of thousands, displacing many more.

Among those targeted by the sanction included an ex-Israel military officer and two South Sudanese nationals, Obac William Olawo and Gregory Vasili. The department also reaffirmed earlier sanctions that cut the taps of financial assistance to the country.

But through his company Gainful Solutions Inc., the former envoy will be required to ensure both presidents Donald Trump and Salva Kiir open a channel of communication so that the American administration “expands economic and political ties with South Sudan.”

In particular, through the April 2 deal, the South Sudanese government wants American private sector investors to troop to the East African nation and invest in “the oil, natural resources, energy, gas, mining and other areas.”

In what could snap out hope for justice to the hundreds of thousands who have borne the brunt of the war, the South Sudanese government wants Renneberger’s lobbying to block the creation of a hybrid court proposed in the accord that ended the hostilities between the warring factions.

In the revitalized agreement that saw President Kiir have a handshake with his former deputy Riek Machar, hybrid courts are proposed as a mechanism of transitional justice to have the planners and the perpetrators of the bloody war brought to book. The agreement was signed in Addis Ababa in September last year.

But the contract signed by a representative of President Kiir wants Renneberger’s lobbying to “delay and ultimately block the creation of a hybrid court proposed in the R-ARCISS.” United States has been key in piling pressure on the South Sudanese leaders to close ranks and end the hostilities.

The Kiir government also wants the American government to establish a military relationship with his country “in order to enhance the fight against terrorism and regional stability.”

Pundits argue that African countries have found the fight against terrorism as the pet subject in the hearts of Western administrations as a way of sidetracking them from their alleged ‘sins.’

The contract will be overseen by a reverend Paul Cheboi who is cited in the agreement as an advisor and coordinator.

Renneberger served as Washington DC’s ambassador to Nairobi from 2006 to 2011 before being succeeded by Robert Godec. He has partnered with Soheil Nazir-Kangarlou to form the Gainful Solutions Inc.