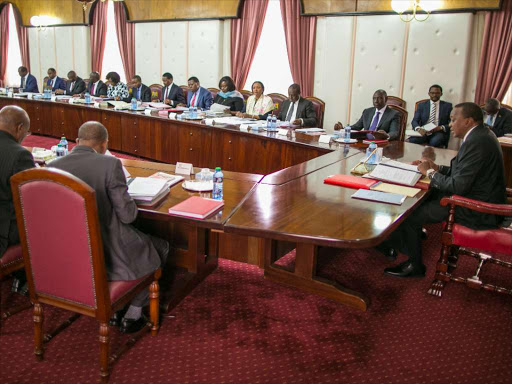 A Cabinet meeting chaired by President Uhuru Kenyatta yesterday came up with measures to resolve the maritime border dispute with Somalia and safeguard Kenya’s territorial integrity.

Foreign Affairs PS Macharia Kamau had earlier said that the Somali government on February 7, this year, offered for auction oil and gas blocs within the disputed maritime territory in the Indian Ocean. He said Kenya has always pushed for diplomatic and peaceful resolutions of the conflict by engaging in talks and submitting itself to international courts.

Somalia has denied offering oil and gas blocs in Kenyan territory for auction. In a letter to the Foreign Affairs ministry, it said it had plans to interfere with any resources in a disputed boundary.

Kenya and its neighbour have been embroiled in a boundary dispute, which escalated in 2014 when Somalia sued Kenya at the International Court of Justice. Kenya stakes claims of the maritime area.

The Cabinet resolution made yesterday will also safeguard marine resources, including offshore oil and gas exploration region in the Indian Ocean.

After the meeting, the government maintained it will not cede even an inch to anyone or any state. Foreign Affairs CS Monica Juma said the government is waiting for a response that meets minimum threshold from the Somali government.

She said though Somalia had disputed the claims raised, it did not deny the existence of a map that depicts the blocs are on Kenya’s.

“We have noted with concern Somali’s intention and plan to auction the oil blocks before January 2020, which is the effective date for sharing between the two countries,” Juma said. “Kenya’s position over this matter is inevitable and we shall not cede even an inch of our territory to anyone.”

The Cabinet also discussed and approved the Sectional Properties Bill, 2018, which vests reversionary interest on individual unit owners and guarantees rights of property owners by conferring. The proposed law simplifies registration of sectional properties and creates an enabling environment for investors and owners.

It will boost revenues. Each unit will be assessed separately for payment of ground rent and rates. It also provides for the closure of the overall title or head lease to prevent mischief by property developers.

Its formulation informed by the fact that the current law is not responsive to emerging market needs such as the growing demand for affordable housing, mixed-use and master-planned communities and mortgage transactions.

The Kenya Commodities Exchange will take effect after the Cabinet discussed and approved it. It will tackle the constraints faced by smallholder farmers and consumers through an organised market-based single platform where buyers and sellers meet. It will ensure better farm gate prices for farmers.

Other benefits include access to proper storage and warehousing, especially for primary producers, miners, and farmers during bumper harvests. It provides for stability in product price and quality, thereby guaranteeing better profits and reducing risks.

The Cabinet also discussed and approved the hosting of the 12th Commonwealth Women Affairs Ministers meeting by Kenya in September. The event is expected to attract more than 1,000 participants from across the Commonwealth countries and globally, including 53 ministers in-charge of gender and/or women affairs and their delegations.

The meetings have been held triennially since 1985 in regionally rotating venues to ensure equitable hosting opportunities. Delegates deliberate on emerging issues, share experiences and lessons, and forge common positions on gender issues.