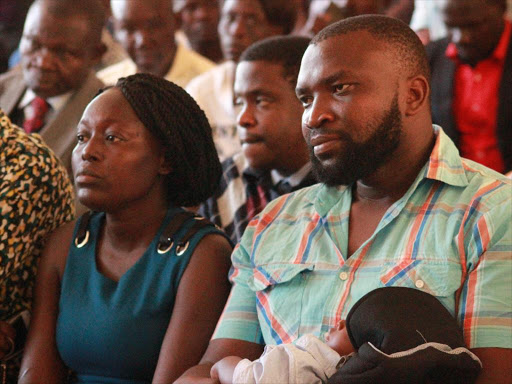 Baby Samantha Pendo’s parents Lencer Achieng’ and Joseph Abaja at the Kisumu law courts during the ruling on the inquest. /FAITH MATETE

“Not a shriek, not even a cry. But a cri de coeur (cry of the heart) expressed simply as a sudden tight, tiny, tot’s grip of her mother’s arm.”

Those were the words of Kisumu resident magistrate Beryl Omollo who ruled yesterday on the police bludgeoning death of six-month old Baby Samantha Pendo in Kisumu on the night of August 10 last year in Nyalenda slum.

“Baby Pendo, lived a very short life. And died a very painful death. She died a death too painful to find expression in a normal infant or baby’s speech of expressing pain or discomfort,” Omollo said, just a grip on her mum’s arm.

Following a , she graphically explained how police officers smashed Baby Pendo’s head while she was cradled by her mother. It happened during protests after the Supreme Court annulled President Uhuru Kenyatta’s reelection.

She found five top police bosses who served in Kisumu during the general elections culpable in Pendo’s death and requested DPP Noordin Haji to take necessary action against them.

In a moment of wanton and unprovoked violence, police officers, who had been given express orders to protect life and property, had violated both the property of residents of Kilo Junction and cruelly crushed the life out of Samantha.

“I am so happy that at last justice has been served. Let my baby rest in peace,” Baby Pendo’s mum Lencer Achieng said.

According to the magistrate, Baby Pendo, a fine flower, was bashed by one of the baton-wielding policemen, who had laid siege to her parents’ house.

They were fast asleep, when at 12.30am, the screams of a neighbor under attack by police, woke them up.

Achieng sat still at the edge of the bed. The sofa, which they use to barricade the door against intruders, briefly held back the police.

Not for long. The police, according to the magistrate, shot or lobbed a tear gas canister through a crack in the door, into Baby Pendo’s house.

They bolted the door from the outside. The family of four struggled to escape. Abanja got out first, straight into the hands of the baton-wielding men. Then his wife too was forced out by the choking smothering tear gas.

Wearing only her underwear, she grabbed Baby Pendo to her bosom and ran straight into eight policemen wearing uniforms, jungle green camouflage jackets and green hats, the magistrate said.

“Achieng, had just walked out of the frying pan that their humble dwelling had become — where a choking cloud of tear gas could have easily suffocated her six month old infant — into the fire of the combat-ready policemen, well kitted with protective body armor and were wielding truncheons menacingly, taking potshots at their distraught victims,” the magistrate said.

Cradling Baby Pendo in her left arm,he pleaded with these men to spare her the beatings, especially because of her infants.

One cop hit her on the left side, another struck her backside, forcing her to look back at her assailant. Then the truncheon struck her left side again.

“And then she felt a tight baby’s grip, Samantha Pendo’s tight grip on her left arm, but not even a shriek,” Achieng told the court.

She looked over her left shoulder at her baby, only to see that she was foaming at the mouth, unresponsive and her head was swelling,” the magistrate said.

Shocked and fearful that the police had killed her baby, she took the baby to her husband, saying “Jose, Jose wameua mtoto.”

Callously, according to the court, one police officer told Abanja, “Fanyia mtoto first aid, hujui kufanya first aid, vutia mtoto makamasi” (“give the baby first aid, don’t you know how to do first aid, suck the mucus out.” Abanja did what the policeman told him and handed Pendo over to his brother Morris Abanja. He went in search of his other daughter, Moesha Akinyi who had escaped into the night.

The nightmare had begun. Achieng was transfixed, not knowing where her other baby, Akinyi, too, had escaped to.

Thomas Abanja, her other brother-in-law took baby Samantha into his house, to feel the baby’s pulse.

However, a quick-thinking neighbour woman hreaded her way into Abanja’s house, got hold of Pendo, and set off, on foot, for the nearest medical facility, a few meters away, across the main road, in Kisumu’s upmarket estate of Milimani.

But, when the Good Samaritan and Thomas arrived, the gate of this health facility was locked. They turned to policemen standing by Kilo. Officers chased them away.

When they got to the second upmarket hospital in Milimani. Its gate, too, was locked. Thomas then got his bicycle out. With the Good Samaritan riding the pillion while carrying the injured baby Pendo, he rode a few kilometers uphill to the next upmarket medical facility.

Achieng, now wrapped in a bedsheet, to cover her naked body, followed them, on foot, and from a distance.

The third upmarket medical center was open. However, the medics on duty demanded sh1500, consultation fee, upfront, in order to attend to a badly injured Baby Pendo.

Once again, Thomas got on his bicycle, to go back and fetch the needed money for medical consultation from Kilo Junction. However, as Achieng and the Good Samaritan awaited the return of Thomas, a more sympathetic medic on duty at this facility, looked at the baby, pulled the Good Samaritan and Achieng aside, and told them that they couldn’t handle this case. He directed them to try the Agha Khan Hospital, a few kilometers away.

The two women set off, on foot, for the Agha Khan hospital, Kisumu. The Aga Khan administered first aid and admitted Baby Pendo, but despite the doctors,’ and the hospital’s best efforts, she succumbed to “a severe head injury, caused by a blunt force trauma,” after staying comatose in the Intensive Care Unit for three days.

“Many police officers, one or two medical officers, stood by, offering neither an emergency treatment nor an ambulance to the next health facility, as Baby Pendo, badly injured, hemorrhaging in the head, slowly and painfully slipped away,” said the Magistrate.