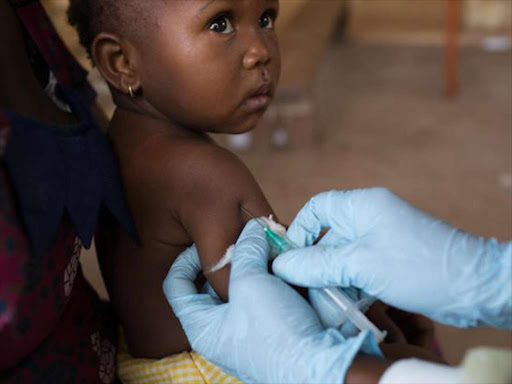 A child gets the RTS,S malaria vaccine during the clinical trials. / FILE

Kenya will become one of the first countries in the world to introduce the malaria vaccine this year.

At least 120,000 children are expected to get the vaccine in select hospitals in Kakamega, Vihiga, Bungoma, Busia, Kisumu, Homa Bay, Migori and Siaya counties.

The vaccine Mosquirix will be given to children aged six months to 24 months in four doses.

The four doses will be administered at six, seven, nine and 24 months through an injection on the upper arm.

The Ministry of Health is expected to formally make the announcement soon, the Star has learnt.

Details of the expected roll-out emerged in a stakeholders meeting organised in Nairobi by the ministry yesterday.

The pilot roll-out will assess the feasibility of delivering four doses in real-life settings, and assess the vaccine’s potential to reduce child deaths.

The pilot has faced various delays as it was first scheduled for October last year.

"We may have been over-optimistic with the timelines," David Schellenberg, scientific adviser to the World Health Organization’s Global Malaria Programme, said recently.

WHO is supporting the introduction of the vaccine in Kenya, Ghana and Malawi.

The pilot will be complete by 2021, but researchers will continue monitoring feasibility and safety until 2022.

The results will help Kenya decide whether or not to adopt the vaccine and make it part of routine immunisation.

Currently, treated mosquito nets and residual spraying are among the major interventions being used to reduce prevalence.

Three major donors are partnering to provide Sh5 billion for the first phase of the vaccine pilot in the three countries.

Mosquirix, also called RTS,S, was first conceived in the 1980s and has undergone all clinical trials, returning less than optimal results.

Its effectiveness diminishes over time and it disappears fastest in children who are most exposed to malarial mosquito bites. However, because no defence against malaria is perfect, the vaccine is being considered in addition to the existing defences.

Health CS Sicily Kariuki last year said Kenya will decide whether to adopt the vaccine after the pilots.

"We look forward to the outcomes of the pilot to further inform in-country policy," she said in a speech on World Malaria Day.

Post a comment
WATCH: The latest videos from the Star
by JOHN MUCHANGI @jomunji
News
14 February 2019 - 18:00
Read The E-Paper