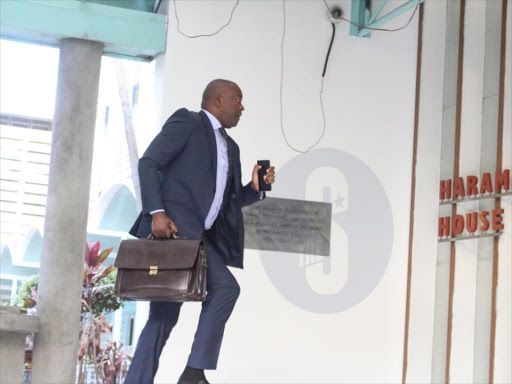 Cabinet Secretaries have arrived at Harambee

House for their inaugural meeting of the Committee chaired by Interior CS Fred Matiang'i.

started arriving for the meeting scheduled to kick off at 8am at around 7.30am.

It brings on board all CSs, Attorney General Kihara Kariuki and Head of Public Service Joseph Kinyua.

Though the agenda of the meeting is not public, insiders in government indicate that the CSs

are expected to come up with a work plan to achieve the objectives of the Executive Order.

not comfortable with his order elevating Matiang'i to quit his government just days after the Star reported the storm created by the move.

The Matiangi-led National Development Implementation and Communication Cabinet Committee will report directly to the President.

It would provide overall supervisory leadership throughout the delivery circle of all national government’s programmes and projects.

The President’s move is seen as a deliberate strategy to take charge of his legacy projects, especially the Big Four Agenda.

The Executive Order was seen as Uhuru's way of taming his deputy William Ruto who has come out to support it saying it gives clarity to the government's agenda.

Over the weekend, the Deputy President said the Executive Order no. 1, of 2019 was meant to ensure proper flow of information on the implementation of Government projects from the grassroots to the national level.

He said development committees would be formed from the grassroots to review the ongoing projects and those, which have stalled, and the reasons why,

for the necessary action to be taken.

"We want to have a proper flow of information as far as the implementation of development projects from the grassroots to the national level is concerned. This is why I ask all leaders at the county level to work with such committees in ensuring the implementation of such projects," Ruto said.