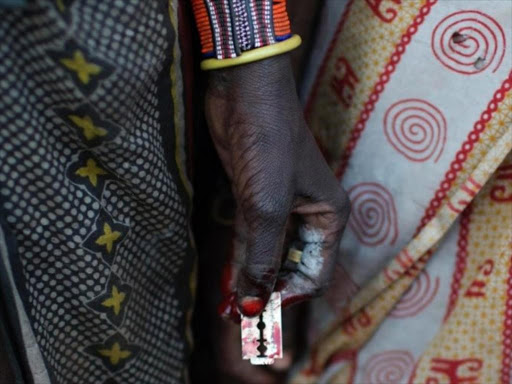 A razor blade used for female genital mutilation among the Pokot. Photo/REUTERS

Ugandan police say 19 people, mostly men, have been arrested in an overnight raid for performing female genital mutilation (FGM), which is illegal in the country.

According to the activists who reported the case to the authorities, at least 10 women were about to undergo FGM at the ceremony in Kween district in eastern Uganda. Police are trying to find the women.

There are concerns that the number of women being circumcised in the Sebei region in the east of the country is on the rise.

Many are believed to be married women who feel pressure from society to be cut. Some feel they face social isolation and are excluded from some cultural activities.

Authorities had been accused of turning a blind eye to recent customary FGM ceremonies, some of which have been taking place in the open.

If found guilty, the suspects face up to 10 years in prison. Police say prosecutions are not common because most FGM is done in secret and it is hard to find evidence.