Terrorist were transported to Dusit by taxi, say police 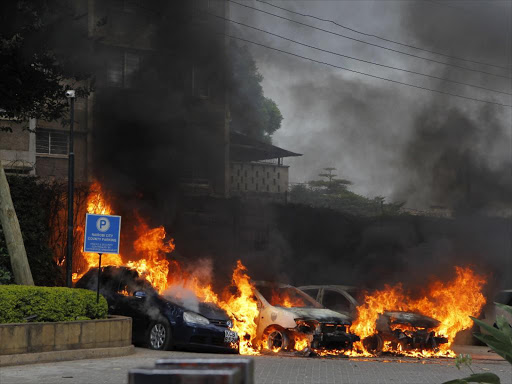 Vehicles burn at the entrance of DusitD2 attack following a terror attack on January 15, 2019. Photo/Monicah Mwangi

The Dusit terrorists were transported to the hotel by a taxi, the police told a court yesterday.

An affidavit filed by police woman Monica Githaiga says on the fateful day, taxi driver Oliver Muthee, drove motor vehicle registration KBR 243D to Dusit with one of the killers.

Muthee, who operates from Gigiri, was arrested on Thursday and gave contradictory information about his movements from Gigiri to Dusit. On January 12, he was at the JKIA, but claims he was transporting customers to the airport.

Joel Wainaina, the second taxi driver, is believed to have ferried one of the attackers to various venues in Nairobi. He was arrested on January 16 at MP Hospital area.

“I and my team of investigators are currently in the process of interviewing possible other taxi drivers, forensically examine the car belonging to Joel, his financial records, examine and analyse his Call Data Records whether he has a possible operation base of the said taxi and whether he does own the car,” read part of the affidavit.

The terrorists were in car registration number KCN 340 E at the time they attacked. According to a search conducted by ATPU,

a Techno Macron fitted with Safaricom sim, and a Nokia without a sim card, extensively damaged laptop - HP Light Book - were found in the vehicle.

Muthee and Wanaina were among five suspects arraigned before a Milimani court. Others are Gladys Kaari Justus, Guleid Abdihakim and Osman Ibrahim. They were detained for 30 days to enable police conclude investigations. Principal Magistrate Martha Mutuku considered the seriousness of the offence.

Kaari, an Mpesa agent, was arrested a day after the attack in Maua, Meru County. She processed an M-Pesa transaction for an individual who identified himself as Eric. Eric they claim had been in communication with Kaari. And a mobile phone registered under the name of Eric was used to register 11 other mobile phones.

It emerged that slain terrorist Ali Salim Gichunge and his bride Violet Kemunto had registered nine phone numbers. Three were registered under Gichunge and six under Kemunto .

“A quick perusal of the nine numbers shows that they were in constant communication with several phone numbers located in Somalia,” read the affidavit

Guleid, a Somali-Canadian, was arrested on Thursday in Sun City, Nairobi, and is being investigated for communicating with one of the attackers. According to ATPU, a man identified as Peter was requested by one of the attackers to use his phone to call a number which belonged to Guleid, but was registered under “Abshirah” who is also being sought by investigators.

The fifth suspect, Osman was arrested at Two Rivers Mall.

Githaiga told the court that the investigations involves a number of agencies and extends to other jurisdictions and they believe that the five suspects have other associates who are yet to be apprehended.

“Intelligent reports so far received show that the attackers had other associates who assisted them in planning and executing the attack within the country and there is therefore a need to carry out detailed interviews with the suspects and the associates to the attackers once they are arrested with a view of finding out their conspirators,” read the affidavit

Before the holding dates were confirmed, the suspects urged the court to reduce the number of days as most of them were family men. In particular, the Canadian national went to an extent of requesting for bail but the court declined. Osman told the Magistrate that his wife is expectant and is due anytime and he needs to be with her wife.

Joel said his children were yet to report to school and are dependent on him.