Single drug that protects against strains of Ebola found 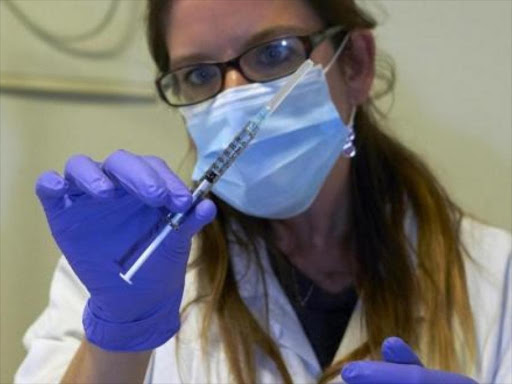 A nurse holds a syringe containing an experimental Ebola virus vaccine during a media visit at the Lausanne University Hospital (CHUV) in Lausanne November 4, 2014. Photo/REUTERS

A drug that protects against every strain of the

virus has been developed by scientists who say it has the potential to save thousands of lives.

No cure currently exists for the pathogen – considered one of the most lethal to have ever been discovered.

But tests have shown a new antibody cocktail can protect animals from the killer virus as a vaccine and reverse symptoms once they have taken hold.

It targets all forms of Ebola known to harm humans, including the deadliest strain behind an ongoing outbreak in the Democratic Republic of Congo.

Researchers hope the experimental drug could control the virus from taking more lives in the African nation, with the death toll standing at least 377.

Dr Thomas Geisbert, the world-renowned Ebola researcher behind trials of the potential medication, said it could continue to protect even if the virus evolves.

The DRC outbreak, known to be the second most deadly outbreak in history, is expected to rage on into the middle of this year, experts on the ground have warned.

The outbreak has been difficult to control because of armed violence and community protests.

Currently, experimental vaccines are only capable of targeting one strain at a time, said Dr Geisbert, a professor of microbiology and immunology at the University of Texas.

Of the five ebola viruses known to infect humans, the Zaire, Sudan and Bundibugyo strain are known to have caused the most fatalities.

The team of scientists were keen to abandon the 'one bug, one drug' approach.

They made a two-antibody cocktail, called MBP134, that would work against the unpredictable nature of Ebola.

Dr Geisbert told MailOnline: 'Three of these species are medically important and have been associated with outbreaks in Africa and caused death in humans.

'MP134 targets all three of these species.'

This suggests, he said, 'that it will continue to protect people if the Ebola viruses evolve over time'.

The vaccine was tested on animals with promising results, which were published in the journal Cell Host & Microbe.

Monkeys and ferrets were fully protected against a lethal Ebola virus infection, and sickness was even reversed once they had begun to take hold.

The monkeys gradually got better and were perfectly healthy at the end of the study a few weeks later.

'We were able to protect the nonhuman primates against all the Ebola species plaguing people at a single low dose ,' said Larry Zeitlin, study author and president of Mapp Biopharmaceutical Inc - responsible for the research of ZMapp, a vaccine that was used in the 2014 Ebola outbreak.

'Further studies exploring even lower doses could open the door to treatment via auto-injectors like the kind used for allergic reactions,' he said.

The drug offers hope for health workers at the forefront of the epidemic, who have been the victims of ongoing conflict.

Mr Zeitlin said: 'The ability to quickly and efficiently provide protection against all Ebola viruses in a single dose would reduce the burden on health care workers in the field during outbreaks, especially in regions that have a less-developed infrastructure.'

It is difficult to say when the drug, manufactured by Mapp and the Biomedical Advanced Research and Development Authority (BARDA), could become available, but it is hoped to come into effect within the next few years or sooner.

The WHO warns that there is 'no proven treatment' for Ebola - but dozens of drugs and jabs are being tested in case of a similarly devastating outbreak.

Currently four experimental drugs are being used to try and combat the disease – mAb 114, ZMapp, Remdesivir and Regeneron - in a real-time study to assess how well pioneering drugs are working.

Patients will get one of the four, but researchers will not know which they were given until after the study.

The World Health Organization is urging a vaccine manufacturer to make more in a bid to try and control the spread, as deaths accelerate in numbers.