Big scandals that rocked Jubilee in 2018 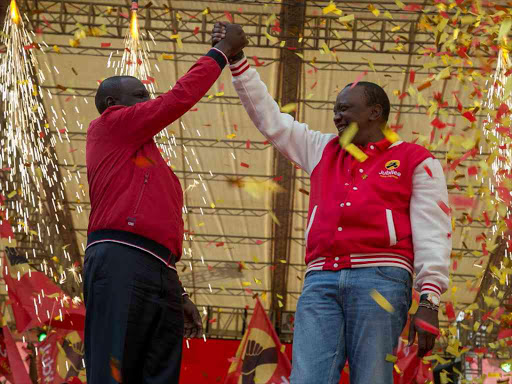 President Uhuru Kenyatta’s second term has been hit by a series of financial scandals. The improprieties threaten to bring the government to its knees.

Close to 150 civil servants including principal secretaries and heads of parastatals have been arraigned and prosecuted for mega scams in which billions have been lost.

Among the shady deals is the Sh9 billion National Youth Service scam. The trial of the NYS corruption suspects started in October. The suspects include former Youth PS Lilian Omollo and former NYS director general Richard Ndubai. Other notable suspects are members of the Ngirita family. The hearing is expected to continue until March when the Anti-Corruption Court will consolidate all the NYS cases into one.

Director of Public Prosecutions Noordin Haji has lined up 43 witnesses to demonstrate how the taxpayers money was stolen using fictitious companies.

Jubilee was later hit by the Sh1.9 billion scandal at the National Cereals and Produce Board .

Three weeks ago, another set of officials from various NCPB stores was arrested and charged in connection with the scandal.

Then came the Kenya Railways scandal. In August, National Land Commission chairman Muhammad Swazuri and Kenya Railways MD Atanas Maina were charged alongside 16 co-accused with conspiracy to defraud the government of Sh221.3 million.

The anti-corruption team in Nairobi also charged them with abuse of office, breach of trust, unlawful acquisition of public property and neglect of official duty.

Swazuri was arrested by EACC detectives for authorising Kenya Railways to buy its own land in a fraudulent scheme in the standard gauge railway compensations.

Charged alongside Swazuri were NLC chief executive officer Tom Chavangi, Caroline Nabalayo and Peter Ng’ang’a, both registrars at the Ministry of Lands.

There was also the Sh419 million scandal that rocked Kenya Power.

In July, Kenya Power MD Ken Tarus, his predecessor Ben Chumo and nine senior managers were charged with various offences including economic crimes, abuse of office and conspiracy to defeat justice in purchase of substandard transformers worth over Sh409 million.

The managers were also prosecuted for the procurement of defective transformers and irregularities in prequalifying 525 companies for transport and labour contracts.

In the Ruaraka Land scandal, two committees of both the Senate and the National Assembly found there was irregular compensation for the controversial 13.5-acre property on which Drive-In Primary School and Ruaraka High School sit.

The disputed land is claimed by Nairobi businessman Francis Mburu. Despite the Ministry of Education irregularly paying out Sh1.5 billion, no one has so far been arrested with Ethics and Anti-Corruption Commission on one hand saying investigations are ongoing while Haji says his office is waiting for another case challenging the ownership of the land to end.

They were charged with seven counts of abuse of office and engaging in a project without planning.

They were accused of spending close to Sh2 billion to construct the Kisumu Oil Jetty which was way above the budgeted amount.

The suspects were accused of using their offices to approve exorbitant payments without following procedure.

At the National Health Insurance Fund, it was estimated that close to Sh1 billion might have been stolen in fictitious transactions, irregular award of tenders and manipulation of systems.