CJ Maraga thanks Uhuru, Kenyans for support after Nakuru accident 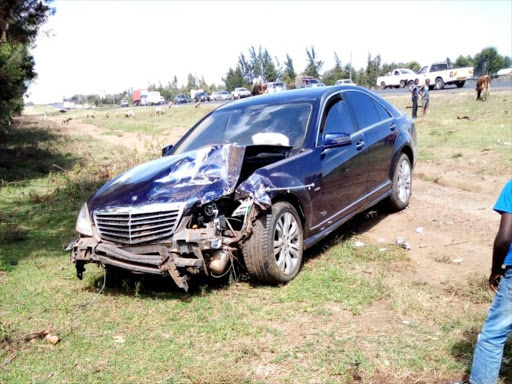 for treatment after an accident in Nakuru.

Maraga and his wife Yucabeth were evacuated from Nakuru after the Saturday crash at Ngata.

"I am particularly grateful to Uhuru on whose instructions we were airlifted to Nairobi."

"After thorough investigations the doctors confirmed that we suffered only minor injuries and are fine," he said in a statement on Sunday.

He further noted that his family is touched with the goodwill messages from DP William Ruto and AU envoy Raila Odinga, who also visited and prayed with them on Sunday.

The driver of the other car, Jonathan Kigen, is also in a stable condition.

"We are praying for him and will do anything to help with his treatment," the Chief Justice said asking Kenyans to observe safety as they travel to their various homes.

Maraga was discharged from the hospital after

being treated for an injury to the head in the accident.

His wife is still in hospital for

Thank you Senate Speaker Hon Ken Lusaka, Senator Sam Ongeri, Senator Gideon Moi, elders and pastors from various churches for visiting us yesterday and today morning. It was an ommision in my statement. We want to appreciate you for coming and praying with us. God bless Kenya.