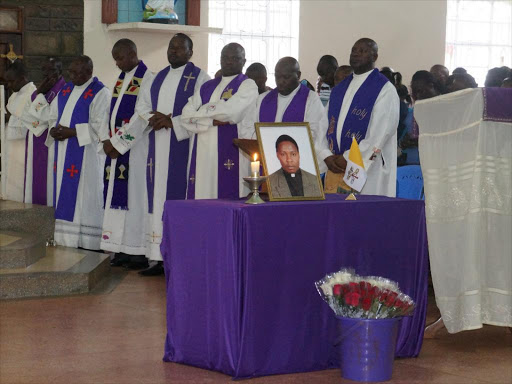 A priest wants the DCI to investigate the murder of Fr Joseph Njoroge.

Fr Patrick Ndung'u said Njoroge who headed Kinoo Parish in Kiambu, had sought advice on how to handle church issues because "individuals would push him a lot".

Njoroge was shot dead on Monday by a gang of four thugs who were on two motorcycles.

They robbed him of an

unknown amount of money in a bag.

Njoroge was attacked while he was driving from the church to a KCB branch in Kikuyu town.

Ndung'u told worshippers at St Peter's Catholic Church that clerics used to encourage their departed colleague during his low moments.

"We cannot all agree that the priest was killed by thugs who wanted to steal the Sunday collections. How much is it, is that the cost of someone's life?" Ndung'u said on Wednesday.

He spoke on behalf of priests during a Mass for Njoroge.

The clergy later led a procession from the church up to where the priest was shot and held prayers. They placed flowers at the scene.

"As human beings, we can forgive, but we ask the Directorate of Criminal Investigations and all other investigating bodies to do their work properly and establish the motive of his murder," Ndung'u said.

Without going into detail, Ndung'u urged worshippers to support church leaders and not frustrate them.

The MCA said he worked with Njoroge and he had agreed to hold a prayer for the ward following the rising cases of insecurity.

"We have lost an important person who had touched people's lives in the work he was doing for the church," Wanjiku said.

"We don't want to hear cases of robbery here, murder and houses being broken into. We are headed towards Christmas. We want the killers of the priest to be arrested as quickly as possible and security beefed up" he said.

the headquarters of Kinoo Parish.