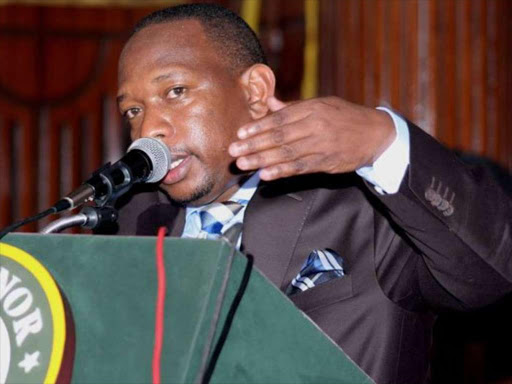 Governor Mike Sonko has told Nairobi residents to walk instead of relying on matatus to take them to the Central Business District. /COURTESY

I will not allow laziness, Nairobians must walk in the bid to decongest the city, governor Mike Sonko has said.

Speaking during a KCB graduation ceremony on Thursday, Sonko said 1km is not too much for the youth to walk to the Central Business District.

"Those who walked to the CBD because of the matatu ban in the CBD, this is just a

step forward... Walking is an exercise and you will still walk. Even in Rwanda, people walk," he said.

"We will only look after the pregnant women, elderly and the physically challenged. For the youth, you must walk. From Muthurwa or any other place to the CBD is only 1km...I will not allow laziness."

Sonko said Nairobi is Kenya's international city and must be made to mirror that.

"Let me be a one-term governor but I will not leave Nairobi the way I found it. There will be politics during the day and they [politicians] will sleep at night," he said.

Thousands of commuters on December 3 walked for long distances to their workplaces after the county government effected the gazette notice banning matatus from the CBD.

Some walked for as long as 5km during the matatu ban Monday.

On December 4, Sonko suspended the ban on matatus from entering the CBD with immediate effect.

The Governor further asked Senator Johnston Sakaja to work with him instead of fighting him.

"Sakaja, I fought former Governor Evans Kidero and even took him to court. But Sonko is not Kidero. Come let us work together," Sonko said.

Sakaja went to court to file a petition against the ban of matatus from the Central Business District.

Through Mwenje and Karanja advocates, he

wanted the suspension of the order to be based on lack of public participation.