Why Ruto ally was removed from Pipeline 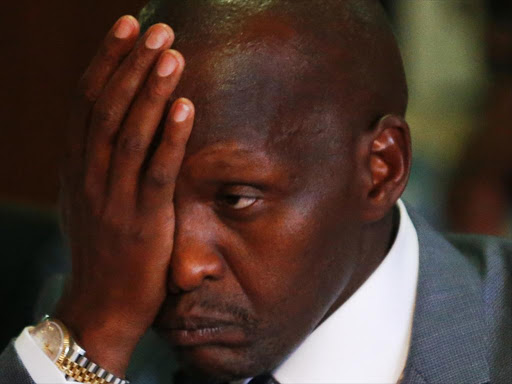 Sang is close to Ruto and is a frequent visitor to the DP's Harambee House Annex and his Karen residence.

The State House official did not say whether he had instructions from President Uhuru Kenyatta to issue the ultimatum.

But the official, according to two KPC board members, informed Sang that he had to leave office to facilitate investigations into multi-million shillings scandals.

"He was given the two choices and asked to choose one. He chose to resign in the hope that he would not be investigated or arrested," a board member said.

But no sooner had Sang handed in his resignation letter than the board accepted it and immediately invited the DCI to investigate a number of issues. It announced that it will undertake a forensic audit of some of major controversial projects.

All KPC directors but one attended yesterday's special board meeting, said to be harmonious.

In a statement, chairman John Ngumi said the board decided to invite the DCI to probe the loss of 11 million litres of fuel under Sang’s watch.

The board appeared to yield to pressure from oil marketing firms by ordering a forensic audit of the stock positions by December 31.

The forensic audit will be done by the firms through their joint company, Supplycor Kenya Limited, after they expressed alarm about an oil theft scam at KPC.

Ten leading oil marketers had written a joint letter dated October 26, 2018, in which they demanded to conduct their own forensic audit to check the accuracy of stock statements issued by KPC.

"The issue is not whether the contract allows KPC

leakage of 0.25 per cent of fuel transported. The issue is whether that fuel was genuinely lost, or whether it was siphoned off,” an industry insider said.

“KPC is still struggling two years later to clean up the spill of 400,000 litres at River Thange. KPC transports 800 million litres a year. If KPC lost 0.25 per cent through leakage, that is five times as much. That would be very evident on the ground but we don't see any such leakage. There is no leakage”, he said.

The marketing firms at loggerheads with KPC management over loss of the fuel want to establish the location of the oil, a request that sparked vicious boardroom wars at KPC headquarters.

“The board directed management to accord maximum cooperation to both the DCI and forensic auditors,” Ngumi said after chairing the special board meeting.

Ngumi, who is serving his second term as chairman of the board, said Sang had given assurance of “full cooperation during the transition”.

“The board will immediately embark on the process of recruiting a managing director,” he said of what could be the next battlefront of intense lobbying within political circles.

Oil marketing firms have disputed the management’s explanation oil loss and want the oil distributor firm compelled to compensate them for products lost while in KPLC’s custody.

A KPC contract with oil marketers requires the oil firm only to compensate losses above 0.25 per cent of the total amount of fuel pumped through the pipeline within a period of six months

Kenya Pipeline management said that the firm only lost 0.15 per cent in the 2017-18 financial year, which is much lower than the compensation threshold set out in the agreement.

An industry insider said the issue to be probed would not be whether the loss met the threshold for compensation under the contract.

The Star established that Sang wanted to resign last week after what a close friend described as a “tormentors' working environment”.

“I met him at the Intercontinental Hotel last week and I actually did not believe that he was the Sang I had known since days on campus. He appeared thoughtful and weighed down. I couldn’t rule out depression,” he said.

An insider who rose through the ranks to be the company MD, Sang has been at the helm of the state agency since April 2016 when he was confirmed.

He was previously the KPC general manager for Finance Strategy and was tapped by the board from within to drive the company’s vision 2025 strategy.

Holding a bachelor's degree in economics and an MBA in strategy, Sang is also a CPA (K) and was at the height of his career before

behind-the-scene manoeuvres forced him out of office.