Fugitive governor fed on milk, blood in the bush for three days 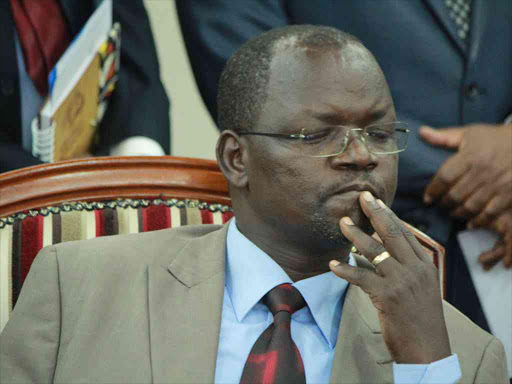 West Pokot governor John Lonyangapuo hid in the bush soon after the state withdrew his security guards on Friday. He survived on blood and milk for three days.

Last Wednesday, he forcibly removed a police roadblock on the Kitale-Lodwar highway and freed a handcuffed boda boda rider who had been arrested for alleged traffic violations. Lonyangapuo then told Interior CS Fred Matiang’i and IG Joseph Boinnet to retrain the police.

The security chiefs responded by recalling his guards.

Lonyangauo was then alone with no officer by his side. Those at his official and private residences were also withdrawn. The police searched for him so he could face charges of aiding a suspect escape from lawful custody.

For fear of prosecution, he proceeded to the bush at the Kenya-Uganda border.

On Monday evening, the governor resurfaced at a public function in Makutano town. He said he was with his livestock in the bush. This was after the High Court in Kitale restrained the police from nabbing him. At the border, he was protected by voters, he said.

“It’s been a long time

since l grazed my animals. I was grazing them at Kanyerus, Morita and Losidok villages for the three days I’ve been away. I’ve been feeding on blood and milk. I’ve really missed ugali,” he said.

He wants officers who have stayed in the region for more than 15 years to be redeployed.

“The officers who have overstayed here are the ones oppressing Kenyans. They should be transferred and others who have served in other regions for a long time should come and work here,” Lonyangapuo said.

He criticised the government for withdrawing his security “as if I had committed a serious offence”.

Lonyangapuo wants those who withdrew his security arrested and prosecuted, warning that it was unprocedural.

“The court has ordered that my security detail be reinstated. I hope the state will immediately effect the order,” he said, adding he was not worried about the withdrawal.

“I was elected by the majority of my people. I had no worry since they provide enough security.”

Lonyangapuo cautioned police officers against interfering with his plan to deliver on his promises to residents. He has projects to implement before his term ends, he said.

“Before I was elected, I had a roadmap on how I want to change the face of this county. I’ll not allow security officers to interfere with my work plan. Everybody should work according to their mandate,” he said.

The governor refused to apologise. He said he was protecting the rights of innocent Kenyans harassed by the police in the name of implementing the ‘Michuki rules’.

“Some police officers are demanding over Sh15,000 before releasing boda boda riders. Where is this money channelled to?” he asked.

He said he will not condone corruption and will continue to protect the voiceless. He opposed the traffic crackdown.

“We have no operation going on in this region. The AP officers should not be on our roads. They should be in insecure places along the Pokot-Marakwet border. We need them there to protect our people,” he said.

Lonyangapuo urged the government to train AP officers so they understand traffic rules before assigning them duties on the roads.

When the Michuki ruless were initiated, boda boda riders were not there and they have to be covered without harming Kenyans, he said.

He stressed that he recognises only two roadblocks on the 80km Kitale-Lodwar stretch and will not accept police officers purring up additional ones.