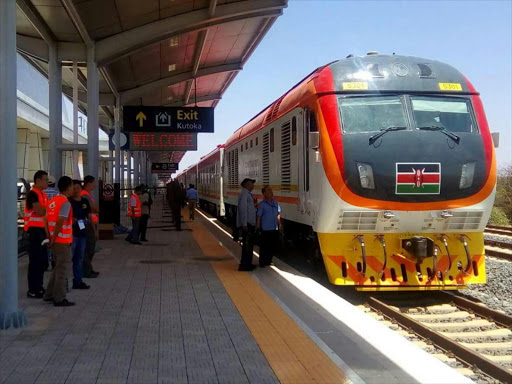 The SGR train before it left the Nairobi station on Wednesday, March 8, 2017. /COURTESY

There was a shooting scare aboard an SGR cargo train when a drunken police officer fired a shot out of the window.

OCS Gerrishon Murithi said the incident happened on Friday around 6pm on an SGR train that was heading to Mombasa.

He said police officer Bernard Ng'ang'a and his colleague Cina Okul were aboard the train from Nairobi terminus on escort duties.

Ng'ang'a ordered his colleague Okul to tell the locomotive drivers to stop the train lest he shoots them.

He then corked his G3 rifle and fired a bullet through the window.

Murithi said Ng'ang'a was released from the escort duties and replaced with Omar Kibwana at Emali Railways Police Station.

Murithi said there was no damage on the train and no one was injured.

Post a comment
WATCH: The latest videos from the Star
by LILLIAN MUTAVI @LillianMutavi
News
01 December 2018 - 09:00
Read The E-Paper