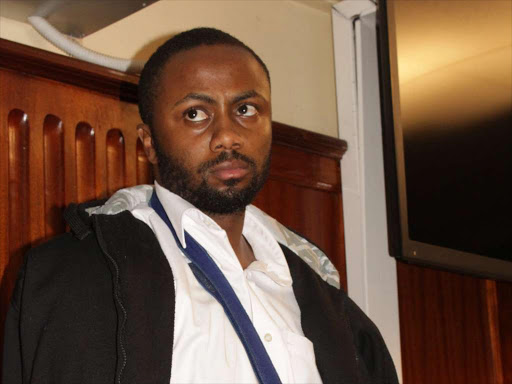 Joseph ‘Jowie’ Irungu has accused a High court judge who recently called him ‘woman eater’ of being swayed by social media and wants him to disqualify himself from the trial.

Jowie who is facing a murder charge together with TV journalist Jacque Maribe said yesterday that Judge James Wakiaga had shown lack of independence and believes he will not get justice before him.

Jowie and Maribe are accused of killing Monica Nyawira Kimani in Nairobi on September 19.

Irungu said his recent denial of bail was based on the judge’s biases and was not informed by any constitutional or legal reasons.

"I am convinced that the judge’s bail denial was not on merit or facts and evidence placed before him but on account of external influence and consideration of false and misleading information on social media platforms against the backdrop of legal and constitutional consideration of judicial independence which is the guarantee of fair trial," said Irungu.

Judge Wakiaga had on October 30 during bail ruling referred to Irungu as ‘woman eater’ and denied him bail while releasing Maribe on Sh1 million cash bail.

"Considering the reporting on how deceased was murdered and wide media coverage which the judge too acknowledged, it was unreasonable for the judge to make such derogatory comments on my character without any tangible or cogent evidence placed before him when he knew so well that the trial had not commenced and that it is the trial court seized with conduct of this matter," Irungu said in an affidavit

He added: "Indeed the judge used the most uncouth, derogatory and injudicious language against me and abused me as being male version of ‘slay queen’ whatever that means and called me a ‘woman eater'".

He said the judge's remarks painted him as a criminal.