[VIDEO] Song and dance as KCPE candidates get their results 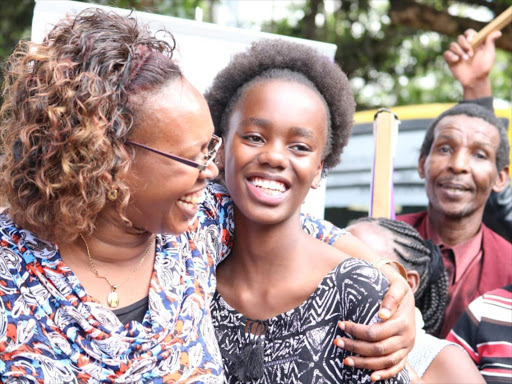 Rawlings Odhiambo from Kakamega Hill School and Olive Wachira from Riara School, Nairobi, tied in the first place with 453 marks in this year's Kenya Certificate of Primary Education exams whose results were released yesterday.

Due to a raft of reforms undertaken in the last three years, the results were released in a record 19 days after the last paper. Previously, results would be released after Christmas.

"Everyone now has the time to prepare for the next stage," said Education CS Amina Mohammed as she announced the results at the Star of the Sea Primary School in Mombasa.

Selection for Form One will start on December 3.

Overall, there was a minor improvement in performance compared to last year's.

However, the boys triumphed in Mathematics, Science, Social Studies and Religious Education

According to Amina, none of the nine examination papers was leaked.

Kenya National Examinations Council chairman Prof George Magoha said cheating has been eradicated. "Cheating in exams is a thing of the past," he said, but lashed out at the "small percentage" of teachers and officials who were caught engaging in malpractices."

President Uhuru Kenyatta announced that the government will admit all the students who sat exams to Form One in what promises to be another headache for education planners.

The 100 per cent transition will trigger cutthroat competition for places in the prestigious schools.

It’s every candidate's dream to join Kenya's 114 National schools which have limited vacancies.

Data from the Kenya

National Examination Council shows that the number of candidates who scored above 400 marks increased by 2,427 compared to last year.

This means that 50 per cent of the candidates who sat the examinations scored above 200 marks.

Amina said that there will only be one selection and candidates who receive admission letters will only be allowed to report to schools in which they have been selected.

"It is the directive of His Excellency the President that all candidates, parents and guardians break for the Christmas festivities having already known the schools to which the candidates have been admitted. There will be no second selection," Amina emphasised.

Amina allayed fears that some of the candidates could miss Form One slots, saying the ministry had already put in place measures to guarantee a smooth transition.

Education PS Belio Kipsang has already dispatched a circular to all field education officers and school managers to ensure that no child stays at home next year.

Amina attributed the exemplary performance to the tough measures introduced in 2016 to curb exam cheating.

The CS said the few cases of attempted cheating through early exposure at the examination centres were all nipped in the bud and exuded confidence that the exams “were conducted on one of the most level playing fields ever”.

According to Amina, only four candidates had their results canceled over impersonation and they will be allowed to sit again next year.

She scoffed at criticism of the high level monitoring that some had branded militarization of exams.

|It therefore surprises me that the ministry’s unrelenting resolve to restore utmost esteem to Kenyans’ academic papers, threatens some of us," Amina said.

For the first time in KCPE history, President Uhuru Kenyatta deployed the Cabinet and other top senior government officials for impromptu visits to select examination centres across the country.

This was part of government strategy to tame exam cheating that three years ago had threatened the credibility of the country's national exams.

According to statistics from the ministry, a total of 183,497 professionals were contracted for the entire exercise that ran between October 30 - November 1.