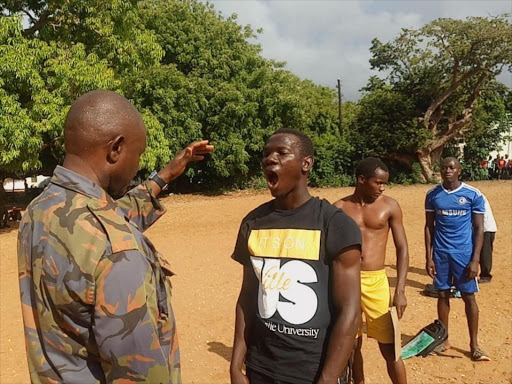 The government has set up a multi-agency team to monitor KDF recruitment in efforts meant to avert bribery.

The team comprises officers from the Military Intelligence, the National Intelligence Service, the Ethics and Anti-Corruption Commission, the Directorate of Criminal Investigations and Transparency International.

The monthlong nationwide recruitment exercise started yesterday and will end on December 19.

The Kenya Defence Forces targets 3,000 servicemen/women, tradesmen/women and constables. In February, KDF trimmed the number of recruits to slightly more than 2,000. In June last year, 3,000 persons were enlisted.

The process is always marred by reports of corruption. In 2013, Sh5 million was paid in bribes and Sh4.9 million involving nine corruption and bribery cases reported last year.

“Twenty cases of malpractice were reported and nine civilians have since been charged. Of the 11 KDF soldiers implicated in the bribery scandals, five have been dismissed from service,” he said.

Kibochi assured, however, that the ongoing process will be aboveboard.

“Those found engaging in malpractices, including bribery, corruption or presenting fake academic documents, will be dealt with in accordance with the law,” he warned after launching the exercise at the Defence headquarters in Nairobi.

After completion of the exercise, successful candidates will be issued with calling letters by the senior recruiting officers.

Last week, Chief of Defence Forces General Samson Mwathethe cautioned candidates against falling for fraudsters hell-bent on conning them out of their cash. He said those who try to bribe their way into the forces will be prosecuted.

“KDF recruitment is absolutely free to all. If you accept to be conned, you will lose your money or property and go to jail,” Mwathethe said.

“It has happened to many citizens during past recruitments. Do not waste money and risk imprisonment. No one can influence the recruitment process.”

Tradesmen category include those with technical or artisan qualifications, while constables will include ex-service members aged from 30 to 55 years and possess a discharge certificate of minimum “very good conduct”, among other qualifications.

Prospective servicemen and women must be aged between 18 and 26 years old. There are 322 recruiting centres across the country overseen by 16 recruiting teams under the command of chief recruitment officer Brigadier George Ejalan.

Of the targetted 3,000 recruits, at least 300 will be women in line with the KDF gender mainstreaming policy and in compliance with the Constitution.

“The Ministry of Defence takes cognisance of the constitutional requirement of gender mainstreaming and making use of all available talent,” the National Defence Policy reads.

“This provision is progressively being fulfilled, taking into consideration the peculiarity of the military profession, through recruitment, training, promotions and appointments.”

Candidates are expected to have original national identity card and academic certificates or other testimonials. Copies or scans of ID cards and police abstracts will be rejected.

Other requirements include being Kenyan citizens, having a minimum mean grade D (Plain) in KCSE exam, being medically fit, having a clean record devoid of criminal liability, and women candidates must not be pregnant.

Mwathethe warned members of the public to be wary of any individual purporting to recruit or issue calling letters away from the designated centres. Such people are fraudsters and must face the full force of the law so they stop swindling Kenyans, he said.