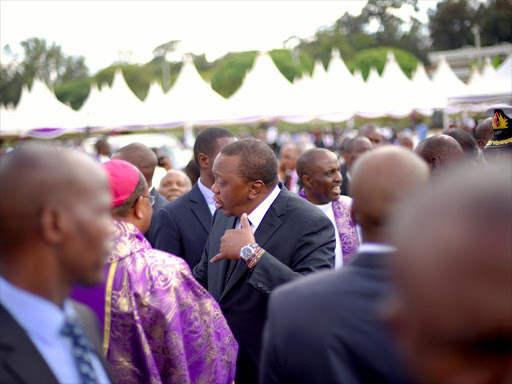 President Uhuru Kenyatta has asked MPs to pass the two-thirds gender rule set to be tabled in the National Assembly tomorrow.

Uhuru told legislators to ensure that they act accordingly and fully implement the Constitution by passing the Bill that is sponsored by National Assembly Majority leader Aden Duale.

Speaking yesterday at a fundraiser at PCEA Berea Church in Gachororo, Juja town, Uhuru said the Bill will pave way for women in the country to rise to top government positions as well as bring an end to the gender imbalance in the country.

“I know some people are saying that the Bill will increase the country’s wage bill. But the earlier Bill has been amended and the seats that have been set have decreased according to our constitution. I therefore humbly request the MPs to pass the Bill so that we can prove that we have fully heeded to what our constitution requires of us,” Uhuru said.

The President challenged women to stop waiting for nominations and instead compete for elective posts against their male counterparts.

He said that it was time for women to rise to top elective positions saying that they shouldn’t be cowed by competition from men.

“The country is yours, step up and compete with men because you were born with leadership. It’s only that men have instilled you with fear. But this shouldn’t worry you anymore because you are actually more in numbers across the country,” he said.

The President promised to assist more women to clinch elective seats in the next general elections saying that he won’t be seeking votes again.

“You’re the one who voted me in massively and now that I won’t be seeking for your votes again, I will be helping you clinch elective positions in the country,’ Uhuru told Kenyan women.

Meanwhile, Uhuru hailed the coordinators of this year’s national examinations saying that cheating or abuse was very minimal.

The President said that the KCPE results would be released tomorrow.

He said that all candidates who sat for their KCPE this year would join secondary schools regardless of the marks they will score.

“Candidates should not panic about what they will achieve. They did their best and the most important thing is that they will all join secondary schools,” he said.

He said that plans have been laid to ensure that every candidate gets his calling letter to the secondary schools of their choice before Christmas.

He called on parents and other education stakeholders in the country to ensure that the transition will be 100 percent and that no candidate will be left out.