Why human trafficking is still rife in Kenya 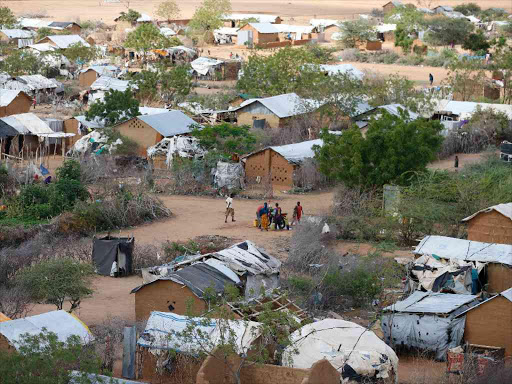 A part view of the IFO 2 Refugee camp in Dadaab on November 23, 2016. Several refugees born and bred in the camps are in a dilemma following the expatriation orders as they consider themselves stateless by virtue of her birth at the camp. Photo/Jack Owuor

Kenya has been flagged as a source, transit, and destination country for persons subjected to forced labour and sex trafficking in East Africa.

Trafficking in Persons Report 2018 by the US Department of State assessed governments' commitment to end human trafficking in 2017.

It notes that Kenya continues to host illegal recruiters, who maintain networks in Uganda and Ethiopia, which recruit Rwandese, Ethiopian, and Ugandan workers through fraudulent offers of employment in the Middle East and Asia.

The report, however, notes the migrants — legal and illegal — are mostly on transit seeking entrance to Southern Africa, Europe and Americas. It adds that Somalia contributed to the highest number of immigrants to Kenya at 485,000. Political instability and conflict in Somalia was the key driver of forced migration in the region. Mutual recognition agreements within the EAC allowing cross-border practices has also been cited as a contributing factor propelling human trafficking in the country.

"Such agreements, along with the abolition of work permits by some EAC partner states, have been vital in facilitating labour mobility among highly skilled professionals within the region," the report notes.

This trafficking is despite a directive by the government to register all agencies linking Kenyans to employment opportunities abroad.

By last year, only 45 out of hundreds of overseas employment agencies had registered with the Foreign Affairs ministry.

The US Department report further notes some refugees from Kenya's largest refugee camp, Daadab, are also subjected to forced labour and sex trafficking in Kenya.

However, Kenya has in the past been flagged as leading

in human trafficking incidents in the region, as the country is a big source, transit point and destination of trafficked victims.

It borders Somalia, Ethiopia, South Sudan, Uganda, and Tanzania, which are known sources of victims.

Moreover, adults in Kenya have been flagged to be more venerable to human trafficking compared to children.

The Trafficking in Persons Report

Counter-Trafficking in Persons Act of 2010 criminalised sex and labour trafficking and attracts punishment of no less than 30 years imprisonment or a fine of not less than Sh30 million.

In 2017, the government reported 35 investigations of potential trafficking cases, compared to 530 in 2016, many of which included smuggling and other trafficking-related crimes.

"Corruption remained endemic at all levels of government, and traffickers were able to fraudulently obtain identity documents from complicit officials, and police often took bribes to warn traffickers of impending operations and investigations," the report reads.

The shortcomings have for the fourth time in a row earned Kenya a Tier 2 in offering protective policies and laws against human trafficking, citing the country's lack of compliance with the minimum standards for elimination of human trafficking.

Countries in Tier 2 category are those that do not fully meet the Trafficking Victims Protection Act’s but are perceived as making significant efforts to comply.

In April last year, the

investigating and prosecuting human traffickers and smugglers of migrants.

"We know that due to the social-economic dynamism of labour migration and development in the world today, many people are seeking better lives for themselves. Men and women are crossing borders in search of employment; among these are the many who are deceived as well as those who risk everything to change their life situations. These activities are being carried out by transnational criminal cartels out to make money,”

"Modern slavery has no place in the world, and I intend to ensure, through diplomatic engagement and increased action, that the United States government’s leadership in combating this global threat is sustained in the years to come," Secretary of State Michael Pompeo said.

The report shows that Kenyans still risk being subjected to human trafficking as illegal employment agencies to Europe, the United States, Southeast Asia, and the Middle East particularly Saudi Arabia, Lebanon, Kuwait, Qatar, the UAE, and Oman continue to exploit then in domestic servitude, massage parlours and brothels, or forced manual labor.

According to Immigration PS Gordon Kihalangwa, the government has in the past three years been using Kenyan missions in Qatar, the United Arab Emirates and Saudi Arabia to protect citizens employed in those countries.

In 2017, the Foreign Affairs ministry said more than 116 Kenyans were assisted to return to Kenya mostly due to poor labour conditions in the Gulf States.

In September 2014, the Kenyan government banned its citizens from seeking domestic work in Middle East countries and revoked the licences of 930 recruitment agencies after reports of abuses increased.

However, March 2016, the blanket ban on the exportation of labour to countries such as Saudi Arabia, Jordan and Kuwait was lifted.

In November 2017, Kenya signed bilateral labour agreements with Qatar and Saudi Arabia, pledging the security of Kenyan migrant workers in the two states.

to as the kafala system, which is used in many other Gulf states has been used by employers to frustrate and mistreat workers, since they cannot change jobs without their employer’s consent and rusk being prosecuted for absconding if they run away.