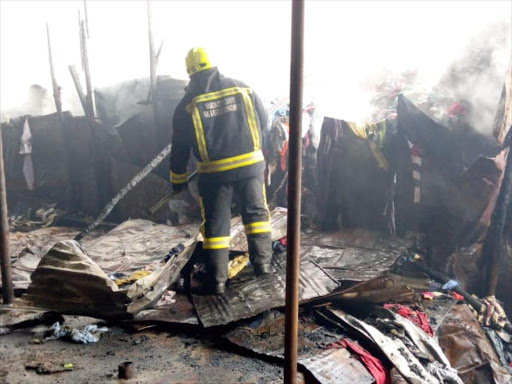 A firefighter at the scene of a fire which gut stalls at Gikomba market, Nairobi on Wednesday, November 7, 2018. /COURTESY

A fire erupted at Gikomba market on Wednesday at dawn destroying a number of shops.

Red Cross, in a tweet, said it had dispatched first responders to contain the situation.

A block near the U&I microfinance banking hall was affected.

"Gikomba Market in Nairobi is on fire. Response teams are at the scene. Updates to follow," Red Cross said.

On June 28, 15 people died and more than 60 others were injured after a timber and second-hand clothes went up in flames.

President Uhuru Kenyatta call for investigations to establish the cause of the fires.

Barely one month before then, an inferno hit a section of the market causing massive losses.

Speaking to the Star, Director of Nairobi Fire Rescue and Disaster Management, Brian Kisali said they received a call was received at about 3am.

Kisali said within four minutes, two fire engines from City Hall had arrived to put out the raging fire.

The responders were backed up by Water bowsers from Nairobi Water and Sewerage Company, a fire engine from Kenya Army and NYS.

The fire was put out within 25 minutes. Kisali said the response was slowed by difficulties in accessing the area.

"The area has stalls blocking the road leading to the affected area. The fire engines were extensively scratched by iron sheets while squeezing through."

He said a woman was taken to Mama Lucy Kibaki hospital after hurting her leg.