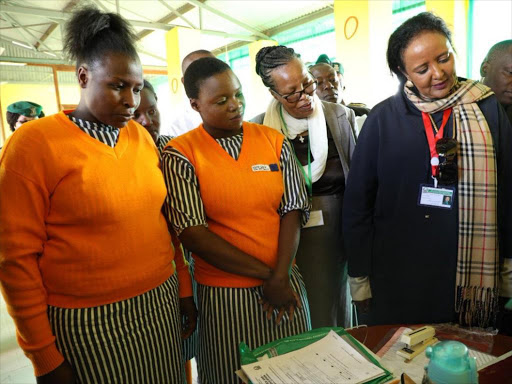 Education Cabinet Secretary Amina Mohamed with inmates at the Lang'ata Women Prison. She oversaw exams at the facility on Thursday, November 1, 2018. /COURTESY

Education CS Amina Mohamed has asked quality assurance and standards officers at the ministry to investigate the cases of pregnancies among school girls.

the ministry is alarmed by the increased cases of teenage births that were reported in the just-concluded KCPE exams.

Nearly 30 pupils gave birth during the examination. The cases were spread across the country. Some girls were also rescued while cohabiting with men.

The CS said the country is facing a crisis "if this is an all-year-round phenomenon."

"Let the quality assurance and standards department work with relevant departments to investigate the cases and give me a report for further action," Amina said.

The Cabinet Secretary spoke at the Lang’ata Women’s Prison, Nairobi, where three inmates sat the certificate of primary education examination.

"These children should actually be in school, and not be in hospital nursing babies. They are babies themselves," Amina lamented.

"Let’s not expose them to things they are not supposed to be exposed to as such a tender age."

She called on parents and guardians to protect the minors adding that the government will punish those responsible for the pregnancies.

Among the latest cases was at Makongo Primary in Kitui where a candidate gave birth in the school compound ahead of the Social Studies paper.

"We will go after the abusers to make sure that they provide support for these babies. If we don’t find the culprits, we must come together as a society to do exactly that."

The CS also raised concern about the rising number of cases of candidates sitting examinations in health facilities due to different ailments.

On the final day of the exams on Thursday, Amina said a candidate sat his exam at the Forces Memorial Hospital and four at the Kenyatta National Hospital.

One of the candidates, the Cabinet Secretary said, went into a coma but was recovering. She confirmed that one died in Laikipia but declined to comment further.

"I’m going to discuss with my colleague Sicily Kariuki (Health CS) with a view to putting in place some special facilities in our hospitals that can be used during examinations to allow candidates to concentrate and focus on getting the best results that they can manage."

Amina further maintained that no cheating was detected in the exams, save for a few challenges experienced in certain centres.

She said a multilateral security agency approach, which was taken in the exams' administration, yielded fantastic results.

"The measures that we spelled out to ensure that Kenyan examinations are credible and of high integrity were enforced in 99.9 per cent of the centres," the CS said.

She also reported that two police officers – a driver and a centre manager sent to escort the papers - are in custody over the loss of examination papers for Olanamuka primary school in Narok county.

The CS said the case is currently in court in Kisii and Migori. "Two people were also arrested seeking to impersonate candidates," she added.

A total of 1.06 million candidates sat this year’s KCPE exams.

On the forthcoming KCSE exams, the CS assured the country that the examinations will not be leaked and urged candidates to prepare adequately.

"It's not a different ball game. It's an exam and we will carry it out exactly the same way. I don't think we will have any problems" Amina said.

"I don't think that there is anything ever perfect but we are ready for these exams," she added.

Post a comment
WATCH: The latest videos from the Star
by EMMANUEL WANJALA @ItsWanjala
News
01 November 2018 - 12:00
Read The E-Paper