Governors back referendum, task team to create questions for poll 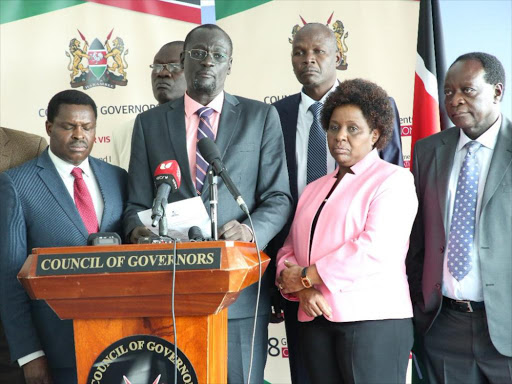 Council of Governors Chairman Josphat Nanok flanked by colleagues during a presser on the referendum at Delta Towers, Nairobi, October 25, 2018. /COURTESY

increase in allocation of cash to counties.

The Council of Governors has, therefore, formed a special committee to help come up with proposals on how to go about the vote.

He said the questions will be informed by an internal audit on how devolution has been implemented since 2013.

The special committee will be co-chaired by Governors Kivutha Kibwana (Makueni) and Kiraitu Murungi (Meru). The team is

expected to report back to COG in the next few weeks.

"The Council of Governors supports the referendum but only if it takes the form of the Pesa Mashinani initiative and if the process is Wanjiku-led."

"Discussion on this referendum question is very critical to county governments because county assemblies will take part in its approval," he said at a presser in Nairobi.

"The Council committee will be consulting the county assemblies forum to agree on a unified county governments voice."

initiative had proposed the counties' allocation to be increased to at least 45 per cent from the current 15 per cent.

Political players in support of the plebiscite, have, for instance, proposed the reduction in number of counties and constituencies, and the scrapping of the woman representative seats.

A number of them have cited grounds of the need to reprieve taxpayers huge cost of representation, which has translated into an unsustainable wage bill.

Asked whether the CoG supports the proposal to reduce the 47 counties, Nanok said that their decision will be informed by the committee's internal audit findings.

The governors further decried the national government's 'slow disbursement' of county cash adding that the situation has affected a number of projects and programmes.

"Ever since the financial year started, most counties have faced a slow disbursement of funds that have affected operations and projects as well as devolution," the CoG chairman said.

The governors further criticised the County Oversight and Accountability Bill, 2018, which is before the Senate.

The county bosses argued that the legislation seeks to unlawfully

give senators more powers in holding them to account.

"The Bill is an attempt to bring through the back-door, the Sh2 billion

Senators have been pushing to be allocated Sh2 billion to use to oversight counties but have been denied.

announced that the sixth Annual Devolution Conference will be held in March 2019 in Sagana, Kirinyaga county.

Post a comment
WATCH: The latest videos from the Star
by COLLINS MUTHAMA AND SAMUEL KISIKA
News
25 October 2018 - 15:00
Read The E-Paper