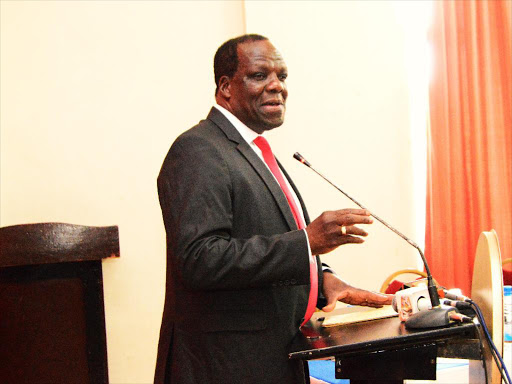 Kakamega Governor Wycliffe Oparanya has differed with leaders from Western who have expressed reservations with the call for a referendum to change the government's structure.

Leaders from the region during an event at Muliro Gardens last weekend vehemently opposed the referendum call spearheaded by ODM leader Raila Odinga.

Amani leader Musalia Mudavadi and Ford Kenya's Moses Wetang'ula are among key leaders who have argued the vote is unnecessary.

They said the handshake between Raila and President Uhuru Kenyatta has already made the life for Kenyans difficult.

Oparanya said those who are against the vote, which is expected to usher in a change in Executive structure, are selfish and inconsiderate of the common man.

He told journalists in his office that

the amendments to the current Constitution, which has lots of loopholes, was long overdue.

"Kenyans must come out and support the move by Odinga to fix the supreme law once and for all. This will be good for everybody," he said.

"Personally, I’m in full support of the course towards the constitutional amendments to create an all-inclusive government."

Raila has proposed that the country adopts a three-tier government that would see the formation of 14 regional blocs.

He on Thursday told his supporters that the "inevitable" plebiscite is tied to the Building Bridges initiative.

ODM deputy party leader, backed the changes saying they will end cases of people getting maimed and, or killed during election contests.

"We must look for ways to have peaceful elections in this country in future and the only way to achieve this is by amending the Constitution by creating more positions at the top."

"It is this way that we will have all the communities included. It is the common man that suffers a great deal whenever we have poll chaos in the country," Oparanya said.

The county chief asked Kenyans not look at the cost of the referendum but to consider its long-term gains.

"How many billions are being stolen from the government that people are not talking about? Referendum happens once after a long time and is hence, worthwhile."