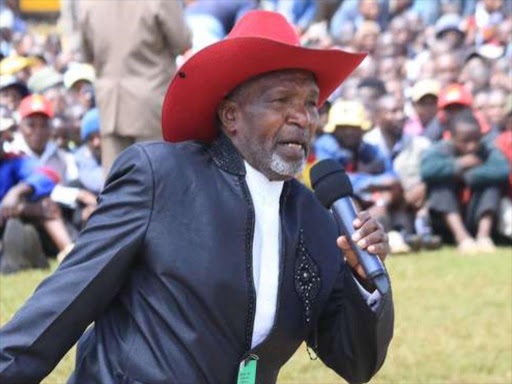 The late Kikuyu legendary musician Joseph Kamaru during a past performance at a public function. /TWITTER

The 79-year-old passed away at MP Shah Hospital, Nairobi where he was rushed on Tuesday.

During his latter days, he complained of a back problem that caused him difficulties in movement.

His son Stephen Maina said the elderly legend was admitted to the hospital on Monday.

"My sincere condolences to the family of my late friend, a music legend of all times Mugatha Kamaru. Huruka Uhoro," he tweeted.

We celebrate his life as a legendary Kenyan musician."

Kamaru started his singing career in 1956.

For the better part of the 1980s, his vocals were a signature tune in most music stores.

The musician was famed for classic hits such as Gathoni and Charia Ungi.

In 1980, he toured Japan as part of Moi’s entourage and composed a song - Safari ya Japan in praise of the President.