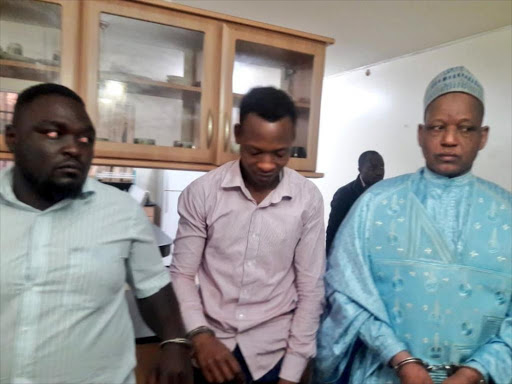 Chad nationals Abdoulaye Tamba, Abdalla Tamba and their Kenyan driver Anthony Mwangangi after they were arrested on Monday, October 1, 2018. /DCI

Three people, among them two Chad nationals, were on Monday arrested in Nairobi with Sh1 billion fake notes in dollar and Euro currencies.

The suspects were nabbed in a raid by detectives at a house on Brookside Drive, Westlands.

Detectives said the fake money, in heaps of the said currencies, was used to fleece unsuspecting Kenyans of their cash.

They added that the arrest was part of an ongoing operation to weed out illegal immigrants.

An officer leading the investigation said they acted on a tip-off by members of the public.

He said they believe the suspects in their custody are the money launders' kingpins.

Kenyan victims of the con game were advised to report to the nearest DCI to lodge their complaints.