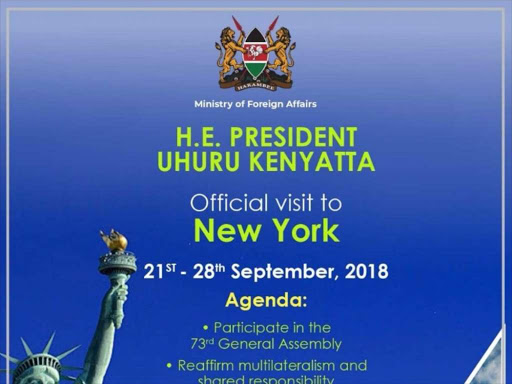 President Uhuru Kenyatta is currently in the United States for the 73rd Session of the UN General Assembly (UNGA 73).

The President quietly left the country on Friday night, hours after he signed into law, the Finance Bill, 2018.

The law that introduces taxes in government's bid to raise about Sh360 billion was met with opposition from various quarters of the political divide.

According to a tweet by Nexus, the Head of State is expected to address the assembly.

Thereafter, he will engage in bilateral talks with various leaders and promote investments in line with the Big Four agenda.

The talks will centre on peace and security, promotion of investment in Kenya, youth leadership and entrepreneurship, and direct flights from JKIA to New York

Digital strategist Dennis Itumbi said the president will also lobby support for the Blue Economy Conference set to be held in Nairobi in November.

However, the President's official communication channels have remained silent on his trip.

According to UNGA website, the 73rd session opened on September 18.

But the first day of the high-level General Debate will be Tuesday, September 25, and is scheduled to last nine working days.

María Fernanda Espinosa Garcés, President-elect of the 73rd session of the UN General Assembly (UNGA), had earlier on announced that the theme of the general debate will be, ‘Making the United Nations Relevant to All People: Global Leadership and Shared Responsibilities for Peaceful, Equitable and Sustainable Societies’.

On Monday, September 24, the UNGA will hold a high-level plenary meeting on global peace in honor of the centenary of the birth of Nelson Mandela, known as the Nelson Mandela Peace Summit.

The plenary will adopt a political declaration negotiated by Member States.

On Wednesday, September 26, the UNGA will hold a high-level meeting on the fight against tuberculosis, as agreed by Member States in February 2018.

On Thursday, September 27, the UN will hold a one-day comprehensive review of the progress achieved in the prevention and control of non-communicable diseases (NCDs), which will be the third high-level meeting of the UNGA on the issue.

It is not yet clear on how long the president will be in the US.