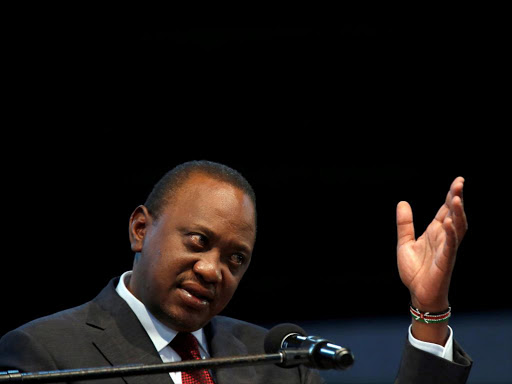 President Uhuru Kenyatta at the Bomas of Kenya, in Nairobi, Kenya October 30, 2017. /REUTERS

This was after only 215 MPs remained in the House when the physical vote on the proposal was called.

The House was forced to go into division after those opposed to the proposal protested after the chair proclaimed that the Ayes had carried the day.

For voting to have happened, 233 MPs were required to be in the chamber.

The development in Parliament means that the fuel tax will now be at 8 per cent as opposed to the earlier 16 per cent.

MPs had previously passed an amendment to the Finance Bill, 2018 suspending the tax for another two years.

Uhuru, however, rejected the Bill and returned it to the House with the new proposal.

The development is likely to ease pressure on Uhuru's administration from outraged Kenyans struggling with a squeeze on living standards.

The government has faced a fuel dealers' strike, anger among commuters and a lawsuit after transport and fuel prices jumped when the 16 per cent value-added tax on all petroleum products entered into force on September 1.

"They have agreed with the president," Majority leader Aden Duale told Reuters during the debate on Thursday.

The tax is part of a government bid to finance key priorities prudently while narrowing a fiscal deficit that the Treasury forecasts at 5.9 per cent of economic output this year.

Like other frontier economies, Kenya has found it tough to secure external funding as emerging markets from Turkey to Argentina are buffeted by turbulence and tumbling currencies.

The fiscal deficit reduction targets were set by the IMF when it granted a precautionary credit deal two years ago that expired this month.

Legislators must approve the new value added tax proposal before Kenyatta can sign this financial year's budget into law.

"Kenya should be a country of concern for investors at the moment," Charles Robertson, chief economist at Renaissance Capital, told a conference in Nairobi on Wednesday.

He cited the challenging external financing environment for frontier African economies and the risk that the shilling currency could weaken steeply in the near term.

The finance committee said in its report on the president's proposals that the VAT measure is consistent with the government's aim to avoid a huge funding gap in the budget.

The finance ministry had budgeted for 35 billion shillings ($347.74 million), which it expected to collect through the tax in the financial year to the end of next June, the committee said, adding the halved rate will allow the Treasury to collect 17.5 billion shillings.

"The intent of this amendment is to ensure that the exemptions in the VAT Act are reduced since this is the best practice," the committee said.

Some lawmakers voiced their support for the report when debate started.

"For investors to have confidence in this economy, we must as a country show that we have fiscal discipline," said Kimani Ichung'wah, a ruling party MP.

Kenyatta said last week that further delaying the tax, which was passed into law in 2013 but never implemented, would compromise the government's ability to fund planned social welfare and development programmes.