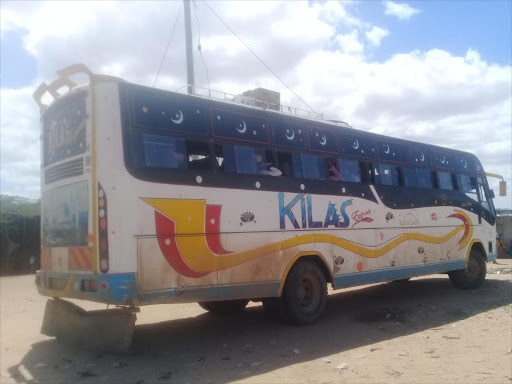 The Kilas bus which was ambushed by al Shabaab fighters while on its way to Garissa on Friday, September 14, 2018. /STEPHEN ASTARIKO

Two people were executed after al Shabaab militants stopped and profiled passengers in a bus heading to Garissa on Friday at about 11am.

Witnesses said the seven terrorists flagged down the bus christened Kilas at Handaro, which is between Ijara and Sangailu towns.

After directing the driver to stop, the militants ordered the passengers to produce their IDs and picked out three non-locals.

"They were then be asked to recite the Muslim Shahada and the seven verses of Suratul Fatiha," a teacher, who was among the ambushed, said.

He said only one of the three recited the verses and was set free. He later alighted at Bura east, some 100 kilometres from Garissa town.

The two, one of them being the bus' turn boy identified as Joshua and a casual labourer based in Masalani, had their hands tied before being executed.

The militants escaped to an unknown location after committing the heinous act. Military officers responded to the distress call by the passengers some minutes afterwards.

Northeastern regional coordinator Mohamed Birik said they embarked on a ground and aerial operation to comb the forest for the militants' arrest.

"It is unfortunate that we have lost to innocent lives of Kenyans. I want to assure that going forward, such an incident will not happen again," Birik said.

He said they are banking on the recruitment of Kenya police reservists in all the 60 locations across the region to boost security.