Amend law so bad lawmakers can be recalled, says Mudavadi 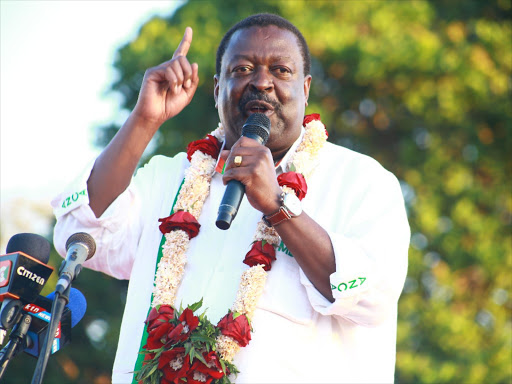 ANC Leader Musalia Mudavadi has called for amendments to the law to make it realistically possible to recall elected leaders.

While the Constitution allows for the recall of MPs, the Election Act 2011 has stringent provisions which make it almost impossible to successfully recall a sitting lawmaker.

Yesterday, Mudavadi said the current format for recall is “deliberately” skewed to create an implementation ‘nightmare’. He said it MPs from being recalled by constituents on grounds of non-performance, lethargy or corruption. “The elections Act ( 2011 ) Part IV sections 45 to 48 makes it impossible to mount a successful recall. Indeed it penalises the aggrieved voter and facilitates the defaulting MP’s stay in office,” Mudavadi said in Nairobi.

The act only provides three grounds under which MPs can be recalled.

These include violating Chapter Six of the Constitution, mismanagement of public resources or conviction for an offence.

However, this must only be after a judgment or finding by the High Court confirming the three grounds.

The recall can only be initiated 24 months after the election of the MP and not later than 12 months immediately preceding the next general election.

Mudavadi said MPs were also exposed by the probe into contraband sugar and the failure to properly interrogate the Finance Bill that included implementation of the VAT on fuel. The bicameral Parliament has also been rocked by corruption allegations. Mudavadi said by passing the Finance Bill without amending clauses with adverse taxes on the poor, MPs committed dereliction of duty.

He said the move amounts to what he described as the highest truancy and betrayal MPs can commit in their legislative role. “Just imagine if a sentry left gates unmanned and an intruder entered, caused havoc and stole property, won’t you be justified in sacking the sentry?” he posed.

“It is time we discarded the protection to MPs and give the voters actual power of recall of wayward leaders. In democratic jurisdictions like in UK, the recall law is enabling and not an impediment on constituents seeking to excise Recall.”

Mudavadi also blamed Parliament for the impending listing of Kenya for debt rescheduling for overshooting its debts ratio in relation to GDP.

He said the debts ratio is 60 per cent, 10 per cent more than the generally recommended ratio of under 50 per cent of GDP. Rescheduling will make current debts and future borrowing extremely expensive, Mudavadi said.

Post a comment
WATCH: The latest videos from the Star
by Felix Olick @olickfelix
News
08 September 2018 - 06:00
Read The E-Paper