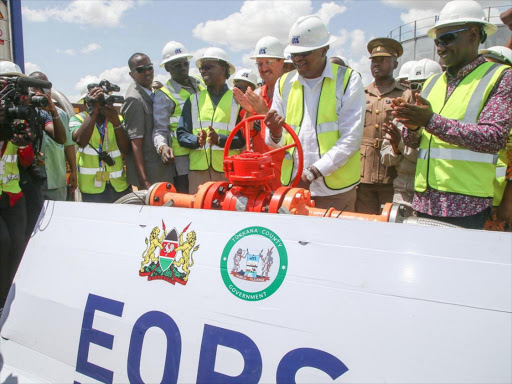 President Uhuru Kenyatta during the launch of the Early Oil Pilot Scheme at the Tullow Oil exploration site in Lokichar, Turkana county on June 3, 2018. /PSCU

This followed a truce between Tullow Oil Plc and the community members after two months of a standoff over "Local Content".

A series of meetings steered by Petroleum CS John Munyes with stakeholders and member of the community saw the resumption of the EOPS.

The EOPS was halted on June 27 by residents of Turkana South and Turkana East constituencies.

This came days after President Uhuru Kenyatta flagged off trucks moving oil from the site on May 31.

The locals had set conditions for the national government and Tullow among them beefing up security in violence hot spots in the region.

They also raised issues of employment, the award of tenders to the local communities among others.

Among measures taken by the government to address the demands was the deployment of security in the troubled areas.

Three battalions of GSU personnel were deployed to Lomelo and reinforced by the Rapid Deployment Unit of the AP.

"We are are putting up a Turkana grievance management committee that will be dealing with any conflicts that may arise in future," Munyes said.

Post a comment
WATCH: The latest videos from the Star
by HESBOUN ETYANG @hesbounetyang
News
23 August 2018 - 18:00
Read The E-Paper