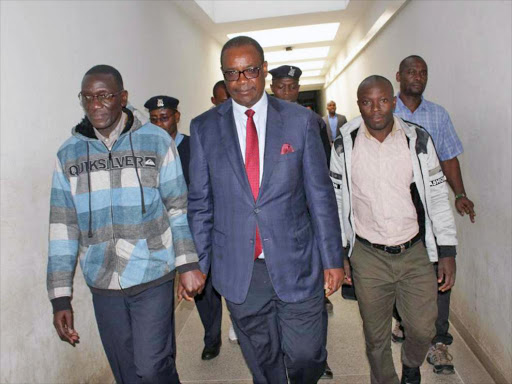 The son of former Nairobi Governor Evans Kidero was arrested last evening in unclear circumstances, just moments after the court released his father on bail.

His father also spent the second night at Integrity Centre because his lawyers were not able to process his Sh2 million bail on time.

Police sources told the Star that Ronald, who runs the Kidero Fundation, was arrested for selling adulterated fuel. Ronald is associated with a petrol station along Kiambu Road.

“Someone complained that he fuelled in that petrol station and his car got spoilt. We are likely to charge him with malicious damage to property,” a CID officer told the Star.

Earlier in the day, his father denied three counts of corruption-related offences.

Kidero was taken to court at about 9am, but took plea to the charges at 3.17pm because the prosecution was trying to arrest other suspects to be charged together with the former Governor.

He walked into courtroom number one at 2.30pm wearing a dark blue suit with a light sky blue shirt and maroon tie with a matching pocket square. Kidero sat pensively in the dock as his lawyers addressed the court on delays in charging him.

He said the prosecution, through delaying tactics, denied his client an opportunity to seek bail at the point of arrest which is permissible under the law.

Trial magistrate Douglas Ogoti directed state agencies to ensure they register pleas by 8.30am every time they bring an accused to court.

Kidero’s charges were read out at exactly 3.17pm.

The prosecution said the former Governor committed the offence of conspiracy leading to loss of public funds amounting to Sh213 million for services not rendered.

He was also accused of receiving benefits of Sh10 million from Lodwar Wholesalers Limited on September 11, 2014.

Kidero faced another count of receiving Sh14 million from Lodwar Wholesalers Limited on August 29, 2014. He denied the charges.

Kidero was charged alongside Maurice Okere.

He said the case against his clients have serious political undertones and urged the court to take judicial note when a criminal process is politicised.

Ojienda said the two accused no longer work for the county government and therefore did not have access to any documents or employees that could make them interfere with witnesses.

The prosecution opposed the bail application, saying the right can be curtailed with compelling reasons.

Prosecutors said corruption-related cases should be treated as serious crimes, a reason they said warranted the denial of bail.

“We must root out this evil and if our brothers take the side of evil, we must root them out too. Corruption has been perpetrated by our forefathers and ourselves and that’s why we must shape up and deal with it,” Joseph Riungu said.

Kidero and Okere were to given a Sh2 million bail among other bond terms.