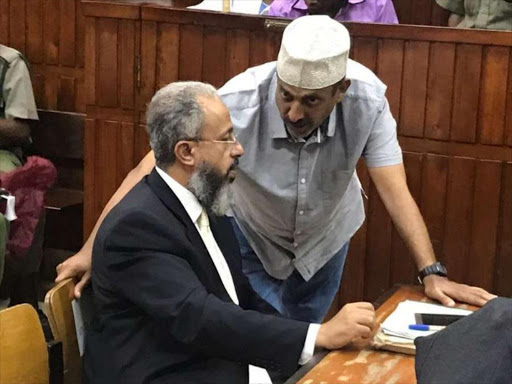 Businessman Feisal Mohammed at Mombasa court where he was acquitted of charges of being in possession of Sh44 million ivory on August 3, 2018. /MALEMBA MKONGO

The High court freed the Mombasa businessman who was jailed for 20 years for being in possession of ivory worth Sh44million.

Justice Dorah Chepkwony on Friday termed the sentence as unconstitutional and freed Feisal.

Haji, through the ODPP twitter page, expressed his dissatisfaction with the ruling adding that he was aggrieved with the judgement.

He said that though they respect the decision of the High Court, the prosecution respectfully disagrees with the conclusion reached by the judge.

"We maintain that evidence presented at trial was sufficient to secure a conviction and is confident that the Court of Appeal will overturn the High court decision," Haji said.

Kenya Wildlife Service also said it is dissatisfied with the judgement and was in consultation with its lawyers to fight Feisal's acquittal.

Chepkwony, in her ruling, said the evidence adduced before the court during the trial had many gaps and doubts.

She said the evidence was clearly circumstantial, which the trial court ought to have interrogated further before using it when the suspect was being sentenced.

Post a comment
WATCH: The latest videos from the Star
by LILLIAN MUTAVI @LillianMutavi
News
04 August 2018 - 12:00
Read The E-Paper