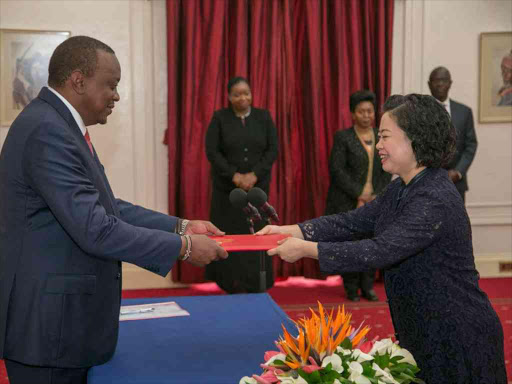 The Chinese embassy has defended Chinese companies doing business in Kenya and the rising debt to China.

It also denied that workers on the SGR project were being mistreated. China’s ambassador Sun Baohong on Friday said reports of SGR workers undergoing humiliating treatment arose from language and culture barriers.

She explained that the acts captured in photos published by a local daily last month were part of a team- building process, which is part and parcel of Chinese culture.

Cotu secretary general Francis Atwoli said the Labour ministry has been reluctant to act on cases of substandard working conditions in many Chinese firms.

All efforts, he said, have been rebuffed with the response: “You want to scare away investors.”

Atwoli said the Labour ministry’s inspectors have not been allowed to visit Chinese companies “yet it is the ministry’s duty to ensure companies adhere to the laws of the land.

He expressed scepticism that the investigations into the mistreatment of workers at the standard gauge railway will bear fruit.

“These companies operate with a lot of impunity. We have written to the President and the Labour ministry, but the government fears frightening investors,” Atwoli told the Star.

Some Chinese firms have barred their workers from joining unions, disclosing painful experiences or working conditions to “outsiders”, he said.

The envoy said Kenya, and Africa in general, have a long history of massive debt and that the only difference with the Chinese lending is that it is yielding fruit in the form of infrastructure projects.

“There is no debt trap with Africa. Africa has a historical issue of debt. By 2006, Africa owed over $600 billion (Sh60 trillion). Africa has borrowed a lot, but for what?” Sun asked.

“We’ll continue to work with the Kenyan government. We don’t think there is any racism. The things in those pictures are a build-up to teamwork. We do that everyday. Even I, the ambassador, do it.”

The envoy could not say how many Chinese are currently working in Kenya. She said the Immigration department is better placed to give such figures because they have records of all entries and exits of foreigners.

Immigration PS Gordon Kihalangwa last week declined to reveal the number of Chinese nationals but said just over 26,000 foreigners have honoured a work permit verification directive issued by the government in May. The verification process is intended to weed out illegal immigrants. Kenya has 34,000 registered foreigners with work permits.

Sun added that China’s presence has created jobs for locals. She said the ratio of Chinese to Kenyan workers in the firms stands at 1:10.

Last month, the Transport ministry told MPs that 841 Chinese (compared to 2,679 Kenyans) are employed on the SGR, which they will manage until 2027 before handing over to Kenyans. The figure contrasted sharply with that of 2,136 Chinese (compared to 13482 Kenyans) declared by the China Road and Bridge Corporation. Kenya is paying about Sh1 billion monthly for the service, whose details remain secret.