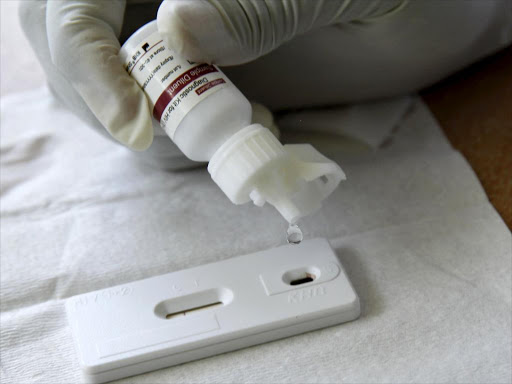 A clinician adds a reactor to a blood sample to test for HIV. /FILE

A new kit that can accurately measure the HIV load in the blood within one hour has been launched.

M-Pima was launched on Tuesday at the ongoing International Aids Society conference in Amsterdam.

The test is expected to help thousands of Kenyans living with the virus to choose the right treatment.

Doctors use it to determine the best ARVs for new patients and check whether drugs in use are working.

Such tests are rare in Kenya and often take several weeks or months if dry blood samples have to be transported from remote places for analysis in Nairobi.

But m-Pima can be used at health facilities in remote places with limited laboratory infrastructure and skilled staff.

"Viral load testing is critical for the monitoring of individual treatment response and the effective use of costly antiretroviral medications, as well as to track the emergence of resistance in people who are HIV-positive,” said Matilu Mwau, director of the Centre for Infectious and Parasitic Diseases control research at

The test kit will be commercially available in Kenya next year.

The rapid turn-around time helps ensure that each patient who needs a viral load test result gets it in a single visit.

The kit was successfully tested in Kenya and in several other countries around 2011.

Matilu, who took part in the initial testing, said: "The integration of point-of-care viral load solutions in healthcare networks will be instrumental in achieving UNAIDS’ 90-90-90 goals.”

Viral load is the term used to describe the amount of HIV in the blood.

The more HIV there is in the blood, the greater the risk of becoming ill because of HIV.

Although it rarely happens in Kenya, one should have the viral load measured when first diagnosed with HIV.

This should help the doctor decide the best anti-HIV drug.

The World Health Organization recommends that the viral load be checked at least once a year and more often if the patient has any symptoms.

When someone is successfully put on ARVs, the viral load should fall to undetectable levels within three to six months.

If this does not happen, the doctor will explore the reasons and discuss what to do next.

If the viral load is undetectable, the risk of HIV being passed on during sex is extremely low, even if condoms are not used.