Ojaamong, nine others in court on corruption charges 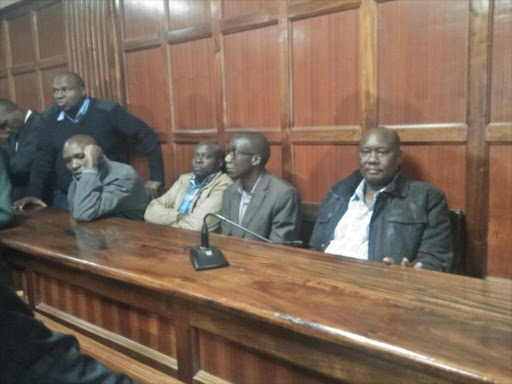 Busia Governor Sospeter Ojaamong and nine other County officials are at the Milimani law courts where they are facing seven counts related to corruption.

They are being charged for allegedly engaging in a scheme to defraud the county government of Busia Sh8 million between the months of March and September 2014.

A charge sheet against them lists seven counts ranging from abuse of office, conspiracy to commit an economic crime and engaging in a project without proper planning.

The suspects further face a count of willful failure to comply with the law relating to the management of public funds and fraudulent acquisition of public property.

Madam R Enterprise, a company that benefited from the county funds similarly faces charges together with its owners Edna Adhiambo, Renish Achieng and Sebastian Hallensleben.

The 10, jointly faces a charge of conspiracy to commit an economic crime.

The prosecution says they entered into a memorandum of understanding for a feasibility study on solid waste management which was to be carried out by Madam R enterprises even though the firm was not procured procedurally.

Ojaamong is being accused of intentionally entering into an MOU while in Berlin Germany on April 7 2014, yet he knew the study had not been budgeted for in the year 2013/2014.

Similarly, he is accused of abusing his office to improperly confer a benefit by signing the agreement which had not been competitively procured as per section 2(b) of the public procurement disposal act 2005.

The prosecution says he did not have the authority to approve the funds.

Wanda and Ekweny face a charge of willful failure to comply with the law relating to the management of funds.

Adhiambo and Achieng are accused of fraudulently obtaining the money for services that had not been rendered.