No longer at ease: Rifts widen in Jubilee camp as Ruto eyes polls 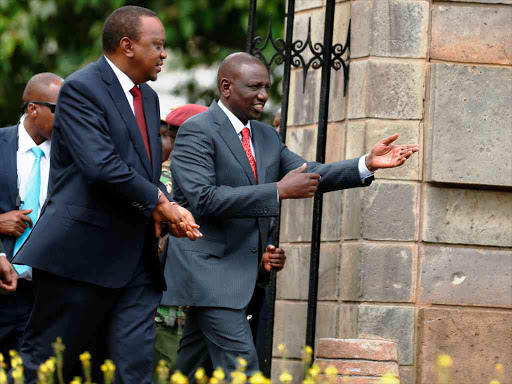 President Uhuru Kenyatta is ushered into parliament by Deputy President William Ruto to deliver his annual State of the Nation address to Parliament. May 2, 2018. Photo/Jack Owuor

Murathe, a close associate of the first family, said early campaigns are a distraction to the President’s mission of delivering his campaign pledges.

“When you go to an area and all you speak about is 2022, it is upsetting some of us because it will distract the President from achieving his promises to Kenyans,” he said.
“Our manifesto pledges have to be fulfilled within four years. We don’t have time to start politicking barely six months after the October repeat elections.”
friction
The remarks are likely to trigger friction in the ruling party.
Ruto’s men claim Uhuru was happy with the DP’s political charm offensive before he ascended to power and the swift change in strategy is suspect.
Murathe is among the high-profile Uhuru associates who Ruto’s allies claim are hellbent on crippling Ruto’s 2022 bid.
Others named in the grand scheme are State House Comptroller Kinuthia Mbugua, Interior PS Karanja Kibicho and ex-presidential adviser Nancy Gitau.
Ruto has, however, rubbished claims of any civil servants fighting him, despite his allies publicly alleging the same.
Speaking on Monday, Murathe questioned why there is panic in Ruto’s inner circle four years before any other presidential aspirant declares interest in the top job.
“We don’t know who from other parties will be running and Kenyans will be free to choose. Other people will come out in 2022. But when they [Ruto’s men] go around the country, what they call kutangatanga [roaming], whom are they racing against? who else has started talking about 2022?” he said.

Related:
lifestyle audit
Murathe warned that the President’s anti-graft whip will not cease, despite protest from Ruto’s backers.
He dismissed Elgeyo Marakwet Senator Kipchumba Murkomen as a man who does not understand Uhuru’s vision.
On June 16, Murkomen said a lifestyle audit will expose “some of us who are enjoying perceived status of rich men”.
This was in response to Uhuru ’s orders that NIS conducts a lifestyle audit for public servants, including himself and Ruto.
Murathe continued, “Lifestyle audit was a pronouncement by the President in the presence of the Deputy President. The DP is on record that he supports the lifestyle audit. I don’t think Murkomen understands where we are going with this thing.”
“The fight against corruption, law and order, discipline and uniting will be the President’s legacy. He is determined and no noise from any quarter will stop or derail him. Watch this space.”
The tough talk believed to have the blessings of the President poses a dilemma to some Mt Kenya leaders and for the first time may split the vote-rich region.
Murang’a Senator Irungu Kang’ata said drumming support for Ruto was only fulfilling a pledge made by Uhuru himself.
“So anyone campaigning or talking about Ruto is pushing the agenda of Jubilee. We should not focus on campaigns now, but the

Big Four agenda, which is also a party position.”
In what appeared as an attack on Murathe, Kang’ata said in any political movement, there must be people he termed as “ethnic chauvinists”. “We have ethnic nationalists and people who are exclusionary in their viewpoints. They may want certain hegemony to be maintained and I think I forsee a situation where some people want to perpetuate a certain supremacy, which is not good.”