Transgender Kenyans fear WHO re-classification will cause confusion 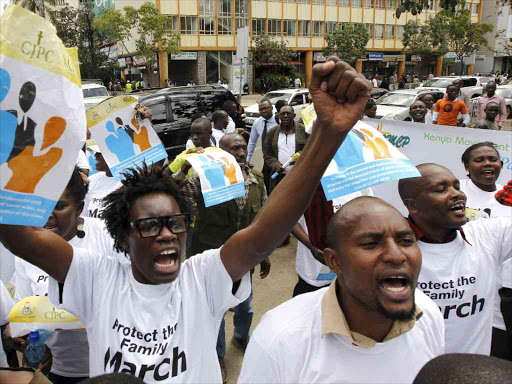 Members of the anti-gay caucus chant slogans against the lesbian, gay, bisexual, and transgender (LGBT) community as they march along the streets of Nairobi, July 6, 2015. /REUTERS

from a mental disorder

to “conditions related to

will result in misconceptions.

The community welcomed the move but noted that the new classification may result in the belief that this type of identity is a matter of sexual health, not gender.

“While doctors and other medical practitioners could argue that sex is a broad term defining a variety of issues, we all know how easy it is for such terms to be used against us,"

told the Star in email correspondence on Wednesday.

Last week, the World Health Organization re-categorised transgender identity, saying "evidence is now clear that it is not a mental disorder".

In the new online International Classification of Diseases (ICD), the WHO said gender incongruence "is characterised by marked and persistent incongruence between an individual's experienced gender and the assigned sex".

“The rationale [is] that while evidence is now clear that it is not a mental disorder, and indeed classifying it can cause enormous stigma for people who are transgender, there remains significant health care needs that can best be met if the condition is coded under the ICD.”

Barbra noted that the classification will ensure they are recognised by health workers, particularly psychologists and psychiatrists.

“They are the ones who diagnose

through issuing a letter of recommendation for further treatment," the director said.

"If psychologists understand that

is a mental condition, they can properly diagnose

with the opening to further

Societal stigma and access to basic services are some of the challenges that trans communities in Kenya and other parts of the world face.

“Many people believe that trans people are extreme gays and should be punished for their behaviour. Many trans people cannot get jobs and access basic social amenities. When

they're questioned about their

look and other matters," Barbra said.

Trans communities in some parts of the world are uncomfortable with the term 'transgender', the argument being that it results in further victimisation.