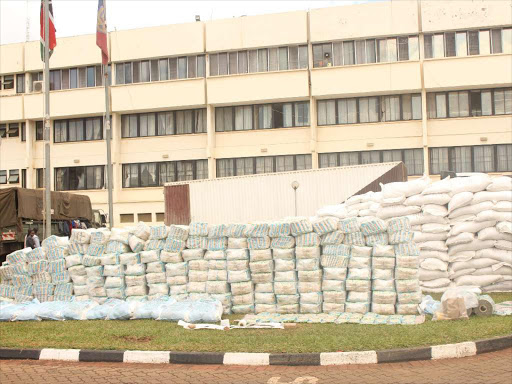 Some of the impounded expired sugar with a packaging machine at the DCI. /EZEKIEL AMING'A

President Uhuru Kenyatta’s younger brother Muhoho was yesterday named in Parliament as an importer of sugar.

A joint Trade and Agriculture committee heard that Protech Investment, whose directors are Muhoho Kenyatta and John Stuart Armitage, was on the list of more than 100 companies that imported sugar duty-free last year.

Last night protocol officials said the firm is a licensed sugar importer but did not ship in the consignment under probe.

The list was tabled on Monday by Agriculture Cabinet Secretary Mwangi Kiunjuri.

Aldai MP Cornelly Serem, the committee vice chairman, claimed Interior CS Fred Matiang’i did not appear yesterday because he knew he would be questioned about the company.

“I don’t want us to cast aspersions as to the people who have imported sugar. Don’t go in that direction,” Kanini ruled.

The Treasury lifted the import restrictions on sugar in May last year to alleviate a crippling shortage before the August election.Importing duty-free sugar would only have been illegal if it was not fit for human consumption.

After protracted debate, the MPs decided that Matiang’i should be given a final invitation. Kanini warned that Matiang’i will be issued with a summons, which comes with “consequences if he does not appear on Thursday morning”.

“He should be summoned and if he is not ready, he should quit the office,” Samburu Woman Representative Maison Leshomo said.

Matiang’i should have attended the committee meeting first before attending the Presidential function.

“Whatever we are saying here is a matter of national interest. Members of the public are in panic mode over the sugar in circulation. Matiang’i was the whistle-blower and he should have found this matter urgent,” Konoin MP Brighton Yegon said.