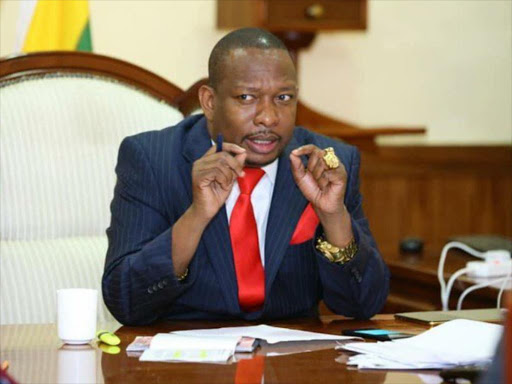 Nairobi Governor Mike Sonko during a meeting at his City Hall office, May 7, 2018. /GPS

The cutoff came barely three weeks after the county lost a court case it filed to stop Kenya Power from disconnecting supply to its facilities.

Nairobi has been at loggerhead with the utility firm since 2014. It says Kenya Power owes it more than Sh600 million in

In 2016, the county went to court and obtained an order blocking the company from disconnecting electricity supply to its facilities until the case was heard and determined.

This was after the company threatened to disconnect power at the City Hall Annex, Pumwani Hospital, Mama Lucy Hospital, public primary and nursery schools and county depots.

It also threatened to turn off street lights.

According to court papers, the county government also said that it should not be asked to pay the debt as it inherited it from the former City Council.

Meanwhile, the Nairobi government has clamped Kenya Power vehicles in apparent retaliation to the cutting of electricity supply.

The vehicles were towed today as the company's officials watched.

County officers supervised the exercise in various parts of the city.

A vehicle of registration number KBG 859 C was towed despite having a sticker that stated that Sh13,000 was paid on May 31.Expiry is after three months.