Handshake committee gazetted, given a year to present report 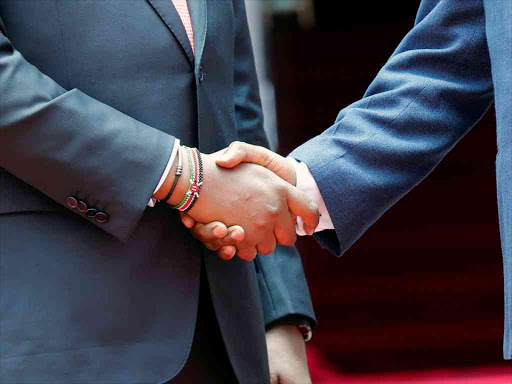 The 14-member advisory committee on Building Bridges Initiative has been gazetted, cementing the legal provision that will now make its resolutions legally binding.

In a gazette notice dated May 24, Head of Public Service Joseph Kinyua said the committee has a year to prepare a comprehensive report on the issues affecting Kenyans, although it shall make periodically written recommendations for action by the government.

The team was appointed on April 30 by President Uhuru Kenyatta and Opposition leader Raila Odinga.

This followed their March 9 unity pact which they said was aimed at uniting the country.

The committee is led by Amb. Martin Kimani and lawyer Paul Mwangi as joint secretaries.

and make practical recommendations and reform proposals that will build lasting unity.

In the performance of its functions, the Taskforce shall regulate its own procedures including appointing revolving co-chairs from among its members.

Kinyua said all the functions of the team must be done within the confines of the Constitution.

“In the performance of its functions, the task force shall outline the policy, administrative reform proposals, and implementation modalities for each identified challenge area [and] consider and propose appropriate mechanisms for coordination, collaboration and cooperation among institutions to bring about the sought changes,” Kinyua said.

News about the gazettement of the team came hours after President Kenyatta and Raila staged another round of commitment to advance the March 9 handshake to incorporate DP William Ruto and Nasa co-principal Kalonzo Musyoka.

Ruto, for the first time, apologised to both Raila and Kalonzo and shook hands while Raila and Uhuru advanced their handshake with to hug.

Kalonzo, too, apologised to Ruto and pledged to support the handshake.

The Building Bridges team is now expected to start moving around the country collecting public views, written memoranda, carry out assessments, studies or research which it will then use to shape its final recommendations.

The team is expected to present its report in May next year.