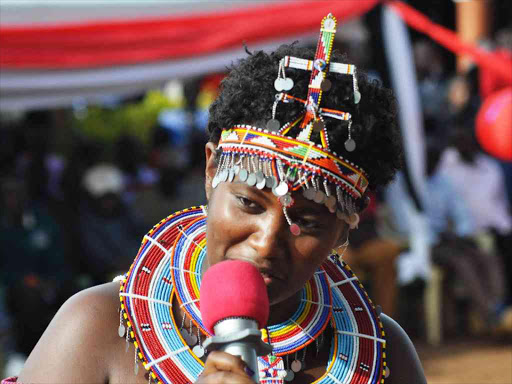 Nice Nailantei, Kenya’s first person to be listed on the Time Top 100 World’s Most Influential Persons has landed a plum job as global FGM ambassador.

Nailantei, who is a programme officer with African Medical and Research Foundation, has been elevated to the position of Amref’s global FGM ambassador.

The announcement made by Amref Programme Director Peter Ofware in Nomayianat village, Kajiado South Sub County on Sunday during her homecoming after her recent achievement.

Ofware said the position was created specifically for Nailantei after her achievement in the fight against FGM, especially among Kajiado Maasai.

“For us to recognise Nailantei’s success and the kind of work she has done, we created the position which will now entail her trotting the globe as Amref’s FGM ambassador preaching against bad practices that negatively affect girl child and women,” Ofware said on Sunday.

Amref has also set up a fund that will offer a scholarship for girls through Nailantei’s initiative, and also build a girl’s institution in Nomayianat that will provide skills and leadership advocacy for girls and women.

Ofware said money has been set aside for the project to start immediately after the residents and leaders in Kajiado donated land for the envisaged construction.

Guests from across the seas, around Kenya, converged at Oldonyo Oibor Primary School in Kimana Ward in Kajiado South for Nailantei’s homecoming and thanksgiving.

Nailantei was recently named Times Top 100 World’s Most Influential Persons of the Year because of her role in fighting female genital mutilation practices among girls in her Kajiado county.

She was named and awarded a prize along with world leaders that included President Donald Trump, Prince Hurry, Meghan Markle, Prince Mohammed Salman, Sadiq Khan, Xi Jinping and Carmen Cruz among others.

She is the face of Maasai Culture and Heritage and Anne Marie Madison Anti FGM Ambassador 2018.

In seven years, she has helped 15,000 girls avoid the cutting ritual.

Her work mirrors national — and global — trends. Rates of female genital cutting worldwide have fallen by 14 per cent in the last 30 years.

Here in Kenya, cases have fallen more than twice that fast, according to Ofware.