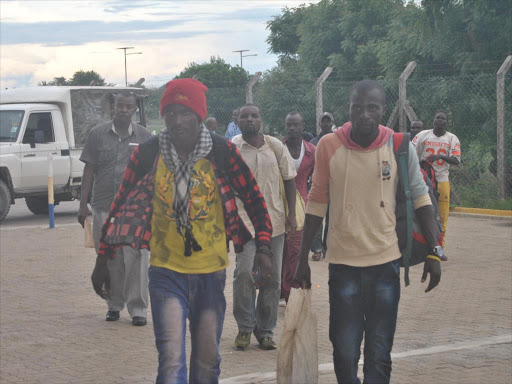 Some of the returnees who had been rescued from al Shabaab in Somalia arriving back home at the Malindi International Airport on April 30, 2018. /ALPHONCE GARI

The returnees, aged between 18 to 38 years, were reportedly lured by one Mohamed Ali - a resident of Marereni, that there was a job in the neighbouring country.

Two among the lot are reportedly from Bargoni in Lamu county while the remaining 11 are from Msumarini, Gongoni, and Marereni in Magarini sub-county.

They were flown from Kiunga where they were being held by KDF personnel. They were received by Malindi OCPD Matawa Muchangi on Monday.

A senior security officer said after being recruited, Ali handed the unsuspecting youths to Abdlalla Shekue - a boat owner in Kiunga, who took them to Somalia.

The official said the returnees were recruited on March 26 and KDF managed to rescue them on April 29 after some reported to their families.

"Shekue handed over them to Yusuf Ali on the pretext that they were going to engage in fishing in Somalia."

"During their one month stay in Somalia, the boys moved from Mdoa to Bula Haji with the intention to be recruited to fight for al Shabaab," the official said.

He said the KDF personnel in Somalia rescued the men at Ras Kamboni and handed them over to the Kenya Police to facilitate their reunion with their families.

They are currently being held at the Malindi police station and will be reunited with their families on Tuesday.

"They will be with the police for profiling to known exactly what they went through and whether they require trauma counseling or medical assistance," the officer said.

The officer urged people to report any cases of people trying to promise them jobs and not accept such offers without verifying with the relevant authorities such as the Labour and Interior ministries.

"Parents should take much interest in their children lack of guidance makes them to loose sight and join illegal groupings," he said.

The Official said since 2011 KDF managed to rescue more than 1,100 youths who had joined al Shabaab.

Majority of these were from from Coast with others from Nyanza, Central, and Eastern regions.