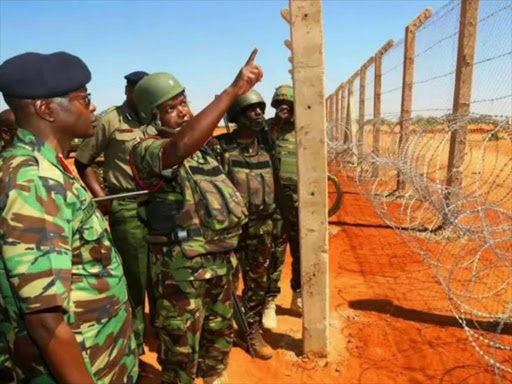 A file photo of Inspector General of Police Joseph Boinnet at the site of the Kenya-Somalia security wall. /COURTESY

Kenya has suspended the construction of the 700 km security wall at the Mandera-Somalia border to quell tensions.

"We have agreed to temporarily halt the construction and border securitisation pending the fate of about 64 houses that lie directly on the border."

The houses had been marked for demolition to allow the construction.

Roba accused the Somali government of spreading propaganda concerning forceful evictions and the demolition of the houses.

"Our Somali brothers have been misinformed that Kenya is plotting to encroach on their land, a situation that has led to a standoff between KDF personnel supervising the project and residents of Bulahawa."

Mahamud said: "We have agreed to stop the plan and invite both sides to discuss key issues including what effects the fence will have on the people."

The Governor noted the two border communities have co-existed and that separation may result in negative socioeconomic impacts.

Last year, the government announced a plan to fast-track the construction of the wall aimed at blocking al Shabaab terrorists, who enter Kenya through the porous border.

Mandera County Commissioner Fredrick Shisia had said construction would resume in April, the project having stalled for close to two years.

The wall will be manned by Kenya Defence Forces soldiers who are already on the ground.

Shisia said hot spots, including Fino, Omar Jillow and Arabia, will be shielded from frequent attacks, as they are less than 20km from the border.

The wall was to have a series of concrete barriers, fences, ditches and observation posts overlooked by CCTV stations stretching from the Indian Ocean to Mandera, where both countries converge with Ethiopia.

The government however resorted to using barbed wires.

The move saw a section of Somali MPs protest,

terming the construction an “infringement on territorial integrity” and insisting Kenya had encroached on their land.

But President Uhuru Kenyatta defended the move saying there was nothing wrong with Kenya and Somalia establishing a common border entry point.

He added the wall will help check people who want to engage in activities which threaten peace in the two countries.

Post a comment
WATCH: The latest videos from the Star
by By PATRICK VIDIJA @vidijapatrick
News
31 March 2018 - 12:00
Read The E-Paper