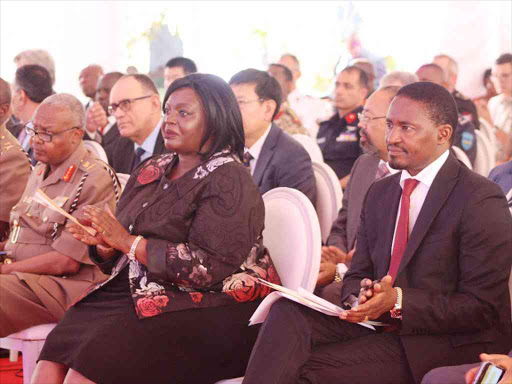 Kenya has turned its focus to the exploitation of the blue economy with the creation of a state department on shipping and maritime affairs.

on Wednesday that a blue economy committee had been formed, the key goal being economic gain through wealth and job creation.

Kenya Coast Guard Bill to provide the legal and regulatory framework for the creation of a viable maritime enforcement force to protect territorial waters.

The blue economy sees the

exploitation and sustainable use of ocean resources for economic growth

said Kenya's strategy for this economy seeks to harness locally available maritime resources in a responsible and sustainable manner.

"To deliver on the promises inherent in the blue economy and to create the secure enabling environment needed to guarantee sustainability, substantial effort and resources must be deployed to construct maritime infrastructure

and vessels, generate and support new industries," the CS noted.

She spoke at the Department of Defence headquarters during defence dialogues - a forum of high commissioners, national, regional and international partners who discuss marine security and the blue economy.

The exploitation of the blue economy is hampered by

Others are degradation of marine ecosystems through discharge of oil, the dumping of toxic waste, illegal sand harvesting and the destruction of coral reefs and coastal forests.

"These problems are further compounded by the onslaught of climate change which has led to rising sea levels and devastating erratic weather patterns," Omamo said.

"All these threats exacerbate poverty, hunger and underdevelopment. They precipitate high revenue losses, stimulate corruption and violence and encourage the uncontrolled migration of desperate youths from our shores."

said their goals are the expeditious delivery of real value in maritime security, trade, new industries and jobs for Kenyans. These, she noted, demand

dedication, careful planning and execution by the government and the forging of strong bilateral, regional and international ties.

The ultimate goal is long term development, she said, adding:

"Our objective is not only to avail economic gains through wealth and job creation but to also secure social benefits for present and future generations and protect our marine ecosystems," Omamo said.

She noted that in the absence of security, the vast majority of economic activities associated with the blue economy will be affected.

"Unsecured ocean territories constitute ungoverned spaces in which criminals, insurgents and terrorists can operate with impunity."